The Dead House by Dawn Kurtagich

I read this book for the first time two years ago after meeting Dawn at YALC, side note Dawn is amazing and really nice. 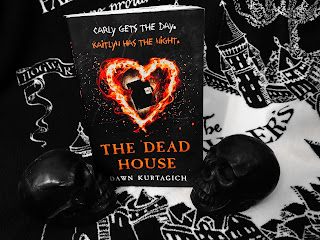 The Dead House takes its readers on a journey through one girls’ descent into madness. Filled with unexpected plot twists and turns, this chilling thriller mixes mental illness and the supernatural in such a wonderful way that leave readers guessing until the end.  Speaking about mental illness in such an inventive way that allows the reader to get a sense of what Dissociative Identity Disorder might be like.

This book allows for narratives to be explored, in the scariest way possible and it makes this book so addictive and clever. I found the book emotional and incredibly moving as the book is a skilfully woven web. Explored in retrospect through diary entries, video transcripts, police interview transcripts, e-mails and instant messages, newspaper clippings and other documents relating to one horrible event known as the Johnson Incident. Through each of the different mediums of storytelling, the tale of the incident begins to emerge one brutal step at a time without giving too much away. This book gets seriously spooky at times but remains thrilling, fast-paced, dark and surprisingly morbid.  Dawn this book made me get spooked by mirrors for a couple of days after which let’s be honest is a brilliant compliment to Dawns ability to weave such a beautifully believable creepy story.

We learn that our main character Kaitlyn is imprisoned in the same body as her ‘sister’ Carly. During the day Carly is awake and in control, while at night Kaitlyn takes control. What starts out as an intriguing and gripping insight into the lives of these two girls quickly becomes something much more sinister. I was instantly drawn in by Kaitlyn’s early diary entries, it showed their daily struggle to cope with their situation, battling doctors who are insistent that Kaitlyn doesn’t exist and she was just an alter-ego of Carly. Kaitlyn is entirely a child of the night, she is visceral and intriguing, violently alive, independent and it is clear she really cares for her sister, Carly. While Carly is seen entirely through the eyes of others, love and care really seeped through the pages and it was such a nice change from some of the bickering sister relationships you read.

As you delve deeper into the book you can see that there was no way out for them; as the psychosis set in deeper and deeper, the book itself changed into something darker. A world that makes you look around and be glad to be sitting where you are.

This might be a little off topic but I love the way the book is designed. I adore the cover and the pages look worn and the fonts and style change throughout the book which all beautifully comes together to create a wonderful self-enclosed world. I honestly can’t recommend this book enough its worth a read at least once.