This review may turn into a giant love letter sorry, not sorry.  Reaper Man is one of my favourite Discworld books and I have just listened to it again on audiobook. Slightly obsessed with this one as I have this book on audiobook, ebook and I’m sure I have two physical copies. Anyone who reads Terry Pratchett will have a favourite character mine is Death and in reaper man, he is at his very best. Feel free to comment your favourite I would love to know. This book came out in 1991 but just in case here’s a spoiler warning. Reaper Man is the eleventh novel in the Discworld series. 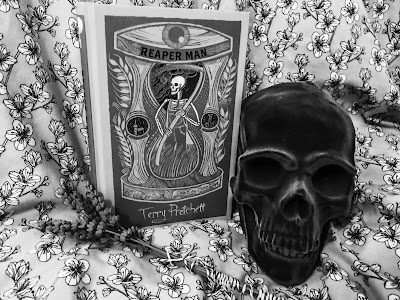 Synopsis
“Death has to happen. Tha’ts what bein’ alive is all about. You’re alive, and then you’re dead. It can’t just stop happening.’
But it can. And it has. So what happens after death is now less of a philosophical question than a question of actual reality. On the disc, as here, they need Death. If Death doesn’t come for you, then what are you supposed to do in the meantime? You can’t have the undead wandering about like lost souls. There’s no telling what might happen, particularly when they discover that life really is only for the living…”

Death retires, the living ceases to die – at least for a time. As a result, Discworld fills with excess life force; this results in inanimate objects become "ALIVE" suits of clothing run around on their own, poltergeist activity, ghosts, and other paranormal phenomena. While every other species creates a new Death for themselves, humans need more time for their Death. The point is, no Death = no moving on. When humankind eventually thinks of a New Death, one with a crown and without any humanity or human face, it goes to take Bill Door.

One of the main characters alongside Death is Windle Poons, The Wizard Windle Poons awakes in his coffin as an undead and for the first time in fifty years, he feels as if he is alive it’s a little sad as he was really looking forward to reincarnation. This extra time proves to be everything to him – at first, he is perfectly happy to go along with his friends’ plans to rebury him (alive) because he understands his being HERE is peculiar. After several misadventures, including being accosted by his oldest friends, he finds himself attending the Fresh Start club, an undead-rights group led by Reg Shoe.

When the New Death comes for Death/Door, having planned for this moment for some time, outwits and destroys it. Having defeated the New Death, Death absorbs the other Deaths back into him, with the exception of the Death of Rats. It’s funny because Death becomes more humanised which is exactly what caused the problem in the first place but I think he’s now probably a better Death than ever before.