The Life and Death Parade by Eliza Wass 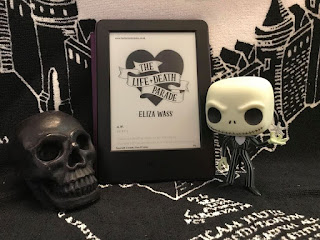 The book takes places in the countryside not far from London, but it oddly vague in its descriptions. Ever since her mother died, Kitty has felt like a guest with her foster family, the wealthy Bramleys that live in the castle on the hill. Kitty’s boyfriend, Nikki, died under mysterious circumstance with the Bramley’s grieving in separate corners of their home, Kitty sets out to find the psychic who read Nikki his fate. Instead she finds Roan, an enigmatic boy posing as a medium who belongs to the Life and Death Parade–a group of supposed charlatans that explore the thin veil between this world and the next. Through this, Kitty gets familiarised with the Life and Death Parade, a group of individuals who perform dark magic tricks for tourists. I found that this book makes you believe in the magic and blurs the lines beautifully between fantasy and reality.

The characters in this book are delightfully complex, have plausible chemistry and made for an odd but harmonious cast. Kitty at first is a bit mopey and unlikable, but I enjoyed seeing her character growth. Nikki, who is almost Kitty’s exact opposite. The other members of the family are eccentric and strange yet believable. The most mysterious character is Roan, he is deep and creepy and a real joy to read. The characters from the Parade are unique, with just the right amount of creepiness to feel the unsettled atmosphere.

The Life and Death Parade is a fast-paced and fun read. It has some dark elements to it, so I don't recommend it to those who are looking something more romantic although it does have some sweet moments. This book was not about young love, it was about how people react to death, which made for a fascinating read. I was amazed by Eliza's skill using word choice and sentence structure to create a wonderful creepy atmosphere, while pulling ideas back and forth through the novel, creating a beautiful work of art.  Although this is a short book it’s incredible how Eliza was able to pack so much emotion in, I admire Eliza's ability to beautifully tell such a full and satisfying story.

This book would be great for those who enjoy thrillers with some supernatural elements.