The Way of All Flesh by Ambrose Parry 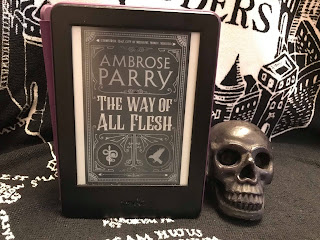 Ambrose Parry is a pseudonym for bestselling author Chris Brookmyre and his wife Dr Marisa Haetzman, a consultant anaesthetist. It was Marisa's research for her Master's degree in the History of Medicine which uncovered the material upon which this novel is based.

This is a remarkable story mixes medical drama with romance and murder mystery. I’ve not read many crime books recently (I think the last was Betty Church), but I found this storyline tense, surprising and made me want to find a similar book.  Chris and Marisa tell the incredible story of the discovery of chloroform and the research done by medical practitioners of the time, with some gruesome procedures tossed in, not unnecessarily mind but to emphasise the reality of healthcare at the time (shudder). Around these wonderful and educational facts hidden in the tale, the authors have woven a chilling and intriguing tale. The book is written in an old-fashioned style with some wonderful words that immerse you more deeply into the era of the story and it wasn’t more difficult to read for it.

The novel is set in Edinburgh in 1847, a dual city, with both the Old Town and the New Town, once the home to brilliant advances in medical science, but a city of great poverty with a truly unpleasant, violent side. In New Town the book focuses on the Home of Dr Simpson, His house is like no other, full of visiting luminaries and daring experiments in the new medical frontier of anaesthesia. Dr Simpson is a well-known gynaecologist and surgeon, who was instrumental in discovering the anaesthetic properties of a substance chloroform. chloroform was used to ease the discomforts of childbirth and to assist with difficult births, which in were frequently fatal. Also living in his house were his assistants, Drs Mathew Duncan and George Keith, all real people.

While the principal characters are all imaginary. Will Raven is given the post of apprentice to Dr Simpson, Raven is also given a room in the Simpson home and there he encounters Sarah, a maidservant who has a fascination for medical matters and secretly reads books on the subject, borrowed from Dr Simpson's library and assists in a basic capacity with clinics. As Sarah is of lowly birth and more importantly, female, is destined to never rise above this station in life.  However, she is a strong-willed young woman, Sarah has hopes of one day working in the medical profession an outrageous idea for a woman at that time in history.  One especially good theme throughout the book is that of misogyny and class in the 19th century which helps you really grasp what little opportunity there was for those born of the ‘inferior sex’ or on the wrong side of town.

On the other side in the city’s Old Town several young women have been found dead, all having suffered similarly gruesome ends.  Just before Raven joins the Simpson household, Evie - a prostitute who's become a friend of Raven - is found dead, her face and body hideously contorted and similar deaths in the poorest parts of Edinburgh have him believing these women may have been murdered. Raven begins to pick his way through the dark motives and powerful alliances that are concealing the truth.

As Dr Simpson treats patients from the richest to the poorest in Scotland's capital city, he and his colleagues carry out daring experiments. Meanwhile, Raven and Sarah have their own motive to look deeper into the city’s spate of suspicious deaths and find themselves forced into the darkest shadows of Edinburgh’s underworld, where they will have to overcome their differences if they are to make it out alive. The couple, initially disliking each other, gradually share a mutual respect.