Thank you, David Meredith, for giving me a copy of this book for free in exchange for an honest review.

In this book, the difficulty of losing a child and a sister is at the forefront.

Aaru delves into a world where there can be an alternative to death. It didn’t take long to be sucked 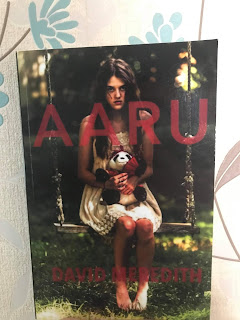 into Rose and Koren's unique world(s) right from the get-go.  Rose is sixteen and her life used to be full of happiness and promise until she was diagnosed with leukaemia. Her health quickly declines and we watch as she goes from bitterness to acceptance of her fate. Every day is an agony and her only hope is that death will find her swiftly before the pain grows too great to bear. Like so many people in the real world can relate to, her family has a hard time accepting her fate. They want her to keep pushing through, to keep fighting and to try just one more treatment. While Rose has accepted that she doesn't have much time left, her sister (Koren) has not.  Koren, cannot imagine a life without her sister, her protector and the one she always goes to.

Then arrives a man who promises a way out - a way to save Rose and to keep their hope and connection alive. Koren does her best to convince Rose to try this one last treatment. Enter Elysian Industries. This treatment consists of a brain scan that will upload Rose's mind into Aaru, a supercomputer, the technology uploads a full copy of the person's mind into a virtual world where there is no pain, suffering and they can turn it into whatever they want. The idea behind the computer system Aaru is something that would be widely sought after in the real world, it wasn’t hard for me to understand what emotions Rose’s family were feeling.  No one really understands or even appreciate the technology that he is referring to. It isn't until after Rose's death that they fully understand what the man had offered them.

After her death, Rose wakes up in this wonderful place, which allows the essence of people to carry on living.  After seeing Aaru for herself, Rose’s sister Koren agrees to represent Elysian Industries as their spokesperson. Soon they realize that their celebrity spokesperson status isn't as great as it's cracked up to be. Not everyone is thrilled with the idea of Aaru. Koren and Rose have a lot to come to terms with considering the new challenges they're facing and have to rethink long-held beliefs. The story typically bounced between the two sisters and with only the occasional another character (The Magic Man). I think that the different perspectives works really well and keeps the reader on their toes and creates a captivating narrative. There was plenty of things happening in real and Aaru’s worlds and both girls had the depth it didn’t matter which one the story turned to.

This book was intense, heart breaking, hopeful and challenges what we feel about death and life after death. David Meredith does a fantastic job of covering difficult and challenging subjects. I could really feel for both Rose and Koren, along with their parents. The book is powerful and I found myself in tearing up over the unfairness and the powerful emotions that flew off the pages. David Meredith has an outstanding ability to play with a person's emotions. Death is one of the hardest things to deal with in life. The fear of the unknown, the fear for our loved ones and the pain of missing them can be overwhelming and crushing. David Meredith uses a lot of detail in this book that makes the characters and the world come alive. The flow of the writing is intriguing, and I can’t wait for book two! this book draws you in and challenges how you feel about death, love and life. Although the book is firmly sci-fi with some thriller elements, it still feels like it could be contemporary - the story's real focus is on its characters.