Happy Christmas Readers,
First, I have a little history about baubles and then I will show you some of my favourite baubles I have got over the years.

The idea for baubles originates from the Roman tradition to hang fruit from trees. The first decorated trees were adorned with apples, white candy canes and pastries in the shapes of stars, hearts and flowers.

Over time, the tradition transformed into glass baubles and became a popular practice in Queen Victoria’s reign, most notably in 1848 when a picture was published in the Illustrated London News of the Royal Family. Queen Victoria and her family were pictured at Windsor Castle stood beside a large tree adorned with glass ornaments hailing from Prince Albert's native Germany.

Glass baubles were first made in Lauscha, Germany, by Hans Greiner who produced garlands of glass beads and tin figures that could be hung on trees. The popularity of these decorations grew into the production of glass figures made by highly skilled artisans with clay moulds and so began producing fruit and nut shaped glass ornaments complete with decorative silver embellishment using mercury or lead.

The artisans heated a glass tube over a flame, then inserted the tube into a clay mould, blowing the heated glass to expand into the shape of the mould. With popularity and interest in the baubles growing, other glassworks began to produce their own style of glass decorations, creating moulds of animals, famous saints and children. Eventually, the beautiful glass ornaments, renowned as a German invention.

Now for the fun bit

This year I added to my Disney bauble collection by raiding Primark. Not long after Halloween they released some Halloween themed baubles which I thought would complement my Disney Nightmare Before Christmas ornaments and they do. Also, from Primark I picked up the Beauty and The Beast tree figures and Mickey and Minnie ears.

This is one of my favourite baubles this is the bauble I got from my friends’ little girl on her second Christmas. (Glitter hand print) 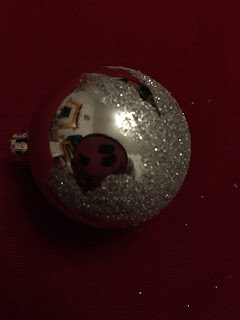 This is the bauble I got last year 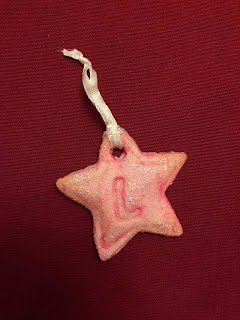 Then we have my Nightmare Before Christmas collection 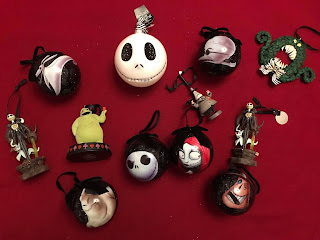