The Girl with All the Gifts by Mike Carey

This book gets special mention because other than This Mortal Coil series it’s the only zombie book that got a physical reaction from me. The words FUNGAL INFECTION just makes my skin crawl!! I also have a little confession I saw the film released in 2016 first, then I read the book for the first time on the flight to Cuba. 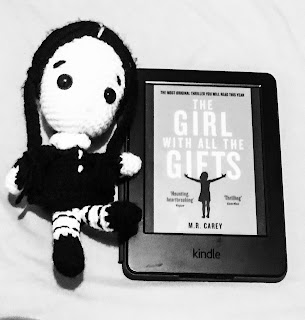 After the zombie apocalypse in England, some infected children have, for some unknown reason managed retained their human intelligence. On a secure military base, the children are all strapped in their chairs and they go through lessons, so the scientists can try to understand what makes these young zombies tick. Through Mikes beautiful storytelling it is slowly revealed that these youngsters have survived and adapted to the zombification process/ Some of the children are unlucky enough to disappear in the experiments performed by the scientist, Dr Caldwell. After the base is overrun, a flood of zombies that forces Parks, a couple of his guards, Dr Caldwell, Miss Justineau and Melanie to go on the run. They head towards the only human haven left in the UK, a base that has been silent for months.

The book is written in multiple narratives from Sgt Parks, Dr Caldwell, Pvt Gallagher, Miss Justineau and obviously Melanie. being told from multiple perspectives helps give the story many unique views on the zombie apocalypse and the aftermath. There are a few other little snapshots from other perspectives but Melanie provides the main voice.

Melanie, seems like an ordinary girl in a strange world of the underground living, military figures and other children just like her. Melanie is not really aware of what she is, or why she is there. The big reveal of Melanie's zombie alter-ego is done in such a chilling way that sets up the rest of the book.  This ‘school’ is the only life she’s ever known. But she is aware that once in a while one of her classmates disappear. There is a horrible moment where Dr Caldwell ask Melanie to pick a number, the next day the child in that numbered room is missing.  Melanie loves school because she loves learning and every now and then she learns a little of the world outside the classroom. As the book progresses, we encounter emotive situations where we learn how Melanie came to be and why she is not like the other zombies

The book starts strongly, leaving the reader wondering just what is going on and is utterly compelling, taking you away from the madness of the real world and in its places offers a unique twist on a popular theme. Mike mixes bleakness, tension and horror elements with unexpected twists and character development it's brilliant the imperfect characters have redeemable qualities so each reader can sympathise with individual characters. Such as the apparently brutal senior guard Parks having a compassionate side and even a little sympathy for Dr Caldwell (only a smidgen).

I really enjoyed this book; it was well written, fast-paced and filled with action. Also, the ending completely threw me I honestly didn’t expect it. Let me explain even though I have watched the film the ending in the book was brilliant and still surprised me even though I knew what was coming. I didn’t expect to suspend my disbelief that well to get a little selective amnesia.

A brilliant book and a must read.