Thank you, NetGalley for the chance to read A Curse So Dark and Lonely by Brigid Kemmerer for free in exchange for an honest review
Spoilers
Due to be released: January 29th 2019 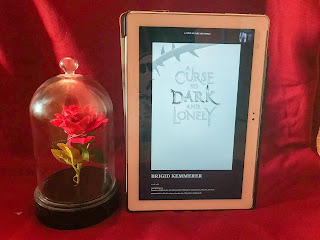 A Curse So Dark and Lonely is a reimagining of Beauty and the Beast with a much darker theme.
I love a good Beauty and The Beast retelling and I have previously read and reviewed The Beast's Heart by Leife Shallcross. This is a long one sorry guys.

You have to resign yourself to the fact that the "beast" or prince is a jerk most of the time. He's is a self-absorbed spoiled kid who never grew up and because of his cold-hearted nature has been cursed to be a beast and has to fall in love with someone and get her to love him back before the last petal of an enchanted rose falls.

Enter Belle, a local girl who is shunned by her fellow villagers for being 'different' aka being a bookworm or an inventor. Belle's father stumbles upon the Beast's castle and is taken as a prisoner, so Belle gives up her freedom in exchange for her father's release. Together, Belle and the Beast learn that physical appearances are a shallow way of judging people and the curse is broken.

However, in A Curse So Dark and Lonely the ‘beast’ Rhen is sensitive, caring, but tortured and hopeful for change. He's still a pain in the butt until you get to that typical character growth but that's to be expected with any Beauty and The Beast story so suck it up, Princess.

Belle in this story is named Harper. Harper is a strong female lead who happens to have cerebral palsy and is beyond fantastic. I loved how Brigid writing style made was clear about what caused it, how it influenced her growing up (therapy, etc), and what it means for her as an adult.

In this Beauty and The Beast retelling, Prince Rhen is the ruler of the fantasy kingdom of Emberfall and has been placed under a curse where he keeps repeating the autumn of his 18th birthday until he can get one of the women his commander kidnaps to fall in love with him. Rhen also occasionally turns into a beast and terrorises his people and causes more and more bloodshed each reset. Time outside of the enchanted castle keeps moving and Rhen barely has a kingdom left to rule and there are threats looming. But after three-hundred seasons, this season will officially be the last.

Let’s get back to the inspiring Harper she lives in the DC area and is used to being underestimated by everyone, even her own family, because of her cerebral palsy. Her mum is dying from cancer, her dad is gone and left them in debt, and her brother's in a lot of sketchy trouble. But when she spots what looks like a kidnapping, she rushes over to help she intervenes and is taken instead to Emberfall. Harper's a fierce main character who really drove the story and it was wonderful to see a lead not only be an intelligent female but who had cerebral palsy, yet was never defined by it. Anyway, she's kind of awesome and I loved her.

Brigid Kemmerer manages to put her own fresh spin on a well-loved tale; she tells a story of a fantasy land that lives parallel to our own modern-day world. Brigid writing is incredibly addictive right from the start. There's a really interesting and the world building and the settings are so vividly written.  I loved the contrast between Harper’s modern-day DC and the fantasy realm of Emberfall.  Seeing the protagonist adjust throughout the story and develop as her situation changes make her all the more realistic. Even though the book is told in alternating points of view it remains gripping, addictive and magical.

There is a wonderful dialogue in this book about feeling accountable for things that you have no control over. Whether that be mistakes that your loved ones are making or the deteriorating health of a loved ones. Some times you have to come to terms with things that are out of our control.