Spotlight: Before Getting Rid of Gil and Josh & About a Boat Trip, a Hold Up, a Strip Show and You by Stephen Benatar


Hello Readers,
Thank you, Sophie and Matador for sending me a copy of Before Getting Rid of Gil and Josh & About a Boat Trip, a Hold Up, a Strip Show and You by Stephen Benatar for free in exchange for a spotlight 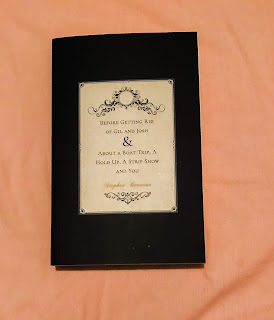 Synopsis:
Before Getting Rid of Gil and Josh
Before Getting Rid of Gil and Josh is both a love story and a comedy-thriller, rather than any stark account of homicide. It is set in 1954, before it was legal for two men sexually to love one another and follows the attempt of an MP’s twin to blackmail him. The MP and his partner decide they have to scare off this sibling but when their tactics unexpectedly result in death, they have to resort to desperate measures to avoid suspicion falling in the right place.

Author Bio:
Stephen Benatar was born on March 26th 1937. He began writing as a boy of about eight, wrote his first novel at nineteen, and then, over the next twenty-five years, eleven further novels – each of them rejected. At the age of 44 his novel The Man on the Bridge was accepted by Harvester,

As well as in America, Benatar has now been published in Italy, France and Spain, a small beginning but his reputation is beginning to grow. He has no wish to be famous simply for the sake of being famous, but he wants his work to survive.