Hello Readers,
Today we’re talking dinosaurs! Again. Today we are looking at the second book in The Extinction Trials series by S.M. Wilson. The third book in the series The Extinction Trials: Rebel and is out 07/02/19. Both books so far have such a beautiful cover and the third fits in lovely. This might be a little bit of a love letter review sorry guys. Also, spoiler warning!

Exile picks up pretty much right where The Extinction Trials left off, not long after the team had returned from Piloria. Storm and Lincoln are both struggling in their own way to come to terms with what they went through and we get to see a bit of a different side to them both. The winnings that Storm won in the first book after she decided to announce her "half siblings" meant that Lincoln’s sister got the medical attention she need, and the siblings of the two teammates they lost on Piloria are now living all together in a single house and it’s something she’s not at all used to. The story is told from the perspective of Storm and Lincoln again, I felt the focus this time was a little more on Storm and her background which I didn’t mind.

Storm is now an aide to the Captain Regent on paper but in reality, she's mapping Piloria and telling him all she knows about the dinosaurs. I really enjoyed getting to see a bit more of the politics behind the Stipulators. Meanwhile Lincoln is working in the lab on the T-Rex virus, but the scientist in charge has them start investigating human DNA, in hopes of finding out more about the blistering plague when his daughter is struck with it. It was great to be reunited with old friends but I did take a shining to some of the new characters fairly quickly. That being said we have a new unpleasant character in the form of Silas, who's after Reban's job and thanks to DNA research he knows exactly how to get it.

The whole time we were on Earthasia I was longing to get back to Piloria and be surrounded by gorgeous greenery and the dinosaurs and it didn’t take long for my dream come true. Silas decided it was time to crack out the dinosaur viruses and basically kidnaps all the previous finalists because they're getting a nice little return trip to Plioria. It wasn’t long before Storm and the team were heading back out to Piloria on a slightly different mission this time. That does mean we get to see Leif again, and it was fascinating to see the relationship between the three of them after the events of the previous book and watching them rebuild their friendship, was heart-warming and exciting to see. Their goal this time around isn't to steal some eggs, but to plant untested viruses that might rid the island of the giant predators. But they have their own priorities finding a cure for the plague that's sweeping Earthasia, and keeping themselves alive. Within minutes of them being in Piloria we were reminded that although Piloria is gorgeous, it is a deadly land where the humans are definitely not in charge.

The ethical themes that focus on our attitude toward the environment are again present in the second book. “Do dinosaurs deserve to die?” however in this book it really does go a step further as we see Storm and a few others face the idea of killing the dinosaurs. Obviously, the title of this series it’s meant for the dinosaurs but also for the state of humanity and that couldn’t be more apparent than in this book. You still don’t know who to be scared of, the humans or the dinosaurs. Sure, the dinosaurs kill but they do so to survive it's not their fault that the humans overpopulated their continent and now are eyeing up their land.

The writing is rich and vivid, with the story being so intense and twisting yet the scenes were so detailed and well written. There is action, danger and adventure and we're left, once again, wanting more. Although Exile didn’t feature quite as much "dinosaur action" as the first book, we get introduced to some new dinosaurs species we didn’t get to see in the first book. The dinosaurs were just as terrifying yet awe-inspiring as previously. There was more focus on the characters development and the complicated feelings they had towards each other. Things are starting to head in a certain direction, one that might not be so good for the dinosaurs and I'm excited and nervous to see how it plays out and I can’t wait for book 3! 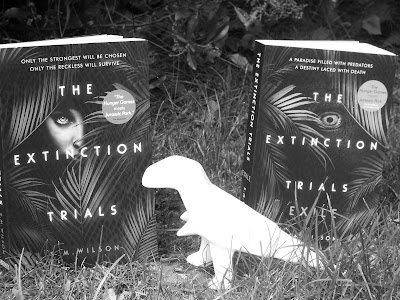