If you followed me through Blogoween you would have seen my post about The House of Night series by P. C. Cast and Kristin Cast and how much I loved the series. Well, imagine my surprise when P.C. Cast saw my post and offered to send me two books (For Free) that continue the series (can we take a moment to acknowledge that I lost it a little imagine what 10 years ago me would have done). 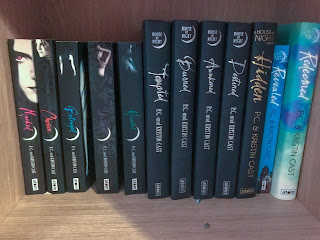 So that’s a little history to now, it just so happened my friend who recommended them to me had started rereading them and I thought I would join her then we realised I was missing betrayed which I then borrowed off her. Turns out this made my cousin and friend nostalgic and they both reread the series too. All of us loved it and it was great opportunity.

This book series holds a place in my heart when I first read them my Grandma was ill, I was being bullied and was well and truly at that awkward secondary school age. I was going to write about what one was my favourite but then I couldn’t pick so we're going to do a one-liner for Betrayed – I still cry. Even though I have read the books at least four times it still gets me.

So before we get into the books that P.C Cast sent me (For Free) next week I am going to attempt to sum up series so wish me luck.

House of Night is a thrilling young adult fantasy series written by P.C. Cast and her daughter Kristin Cast. I think everyone should enter the dark, magickal world of the House of Night at least once, a world similar to this one, except vampyres exist.

The series follows 16-year-old Zoey Redbird, who gets “Marked” by a vampyre tracker and begins to undergo the “Change” into an actual vampyre. She has to leave her family and move into the House of Night, a boarding school for other fledgeling vampyres like her. Zoey soon starts attending the House of Night, a school where if she survives the “Change” she will train to become an adult vampire sadly not all of those who are “Marked” survive the change. It’s tough to begin a new life, away from her parents and friends. It gets even harder for Zoey to fit in when she finds she is no average fledgeling. She has been Marked as special by the vampyre Goddess, Nyx. It’s within the school’s walls that most of our action takes place as Zoey meets new friends, finds love, channels her awesome new powers and begins the fight against Darkness. We soon discover that things at the House of Night are not always what they seem.