Thank you P. C. Cast for sending me a copy of Lost for free in exchange for an honest review. Spoiler warning.

No more freaking out that P. C. Cast knows who I am as promised 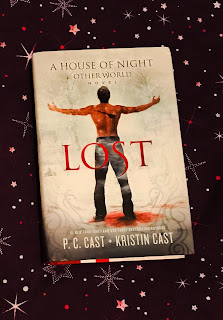 I can't believe Zoey and the Nerd Herd are well and truly back! This book follows on from Loved. This is a great set of book series and I absolutely loved them when I was a teenager.  Obviously, this series has a lot of backgrounds already, but I was sucked in from the events from Loved and I couldn’t wait to read it.

This book explores the Other World, where Other Kevin who is a red vampire had to return to his world and time to fight Neferet before she becomes an immortal. What was also really thought-provoking was seeing what would have happened if Neferet has carried through with her plan with the red Vampyres and conquering the world. Humans are basically nothing, they are living in a city filled and ruled by vampyers. Zoey keeps having dreams and pain that she discovers "other Kevin" is using old magic. She has to stop him so she decides to go to the other world where she is dead and help Kevin. It really made me thankful just how much Darkness was held at bay when Zoey and the Nerd Herd were at work for Light. This book had several different narrators and it made it that much more compelling.

Let’s talk about Kevin…
I loved how Kevin when he was introduced in Loved, but he grew up so much and I really enjoyed seeing him take an active role in the rebellion. I found him to be a lot more relatable and less dramatic than Zoey (Still love ya Z). Kevin is super awkward (bless him), but also determined to get stuff done.  Seeing Kevin deal with Old Magick was also an incredible development the idea of a creature which isn’t allied to Light nor Darkness is definitely a fascinating concept.  Other Kevin has to convince his grandma Redbird that he is a good red vampire and help the resistance. Then he has to convince Aphrodite she is good and well loved. Nyx reappears and encourages others to find love, restore love, and love always wins.

Seeing Otherworld Aphrodite was a little heartbreaking. You get an understanding of why she’s considered the “b***h” in the original series. You get to see the sacrifices she had to make to both keep her powerful position as Prophetess while also not totally give in to the Darkness.  Reading Other Aphrodite's chapters and getting to see what her world was like before she had any friends and the character growth, they gave her.  I honestly believe next time I reread the series it will change the way I see Aphrodite.

STOP now to avoid Spoilers
Major Spoiler: I was not read for seeing Anastasia and Dragon together in one world again. Dragon was always a tough character for me to like but over the years of reading House of Night I grew to appreciate him.

Huge Spoiler: No details Cast’s can we stop making me ugly cry now?.....Please? I asked nicely?