When I Fall, I Shall Rise by Dan Shtauber

Thank you to Tomoson Reviews for sending me When I Fall, I Shall Rise by Dan Shtauber for free in exchange for an honest review. 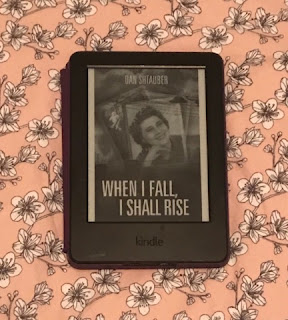 I agreed to read and review this book not long after I read The Tattooist of Auschwitz by Heather Morris who needs time to mentally recover. Like the tattooist this a memoir and although the subject matter is harsh, I have to read them for in every single story of the horrors there are the stories that show a glimpse of hope, hidden strength that allowed the storyteller to survive. I am a strong believer in the fact we need to read these testimonies so that the events and people will never be forgotten and to prevent such horrific events happening ever again.

Before Dan delves into the memoir, he states that as he grew older, he became more aware of his Grandmother’s survival during the Holocaust. His Grandmother always wanted to share her experiences however his Grandfather preferred to keep his silence and spoke little of the Holocaust before she passed away in 2001.

Dan is regretful that he didn’t really sit down listen and inquire with his Grandmother to hear her story. However, in 1997, Dans Grandmother shared her story with Yad Vashem for a memorialisation project. The family received the tapes on which grandmother’s testimony was taken and closely guarded by Dan but he never watched them fully.

In January 2016, Dan decided to honour his grandmother on what would have been her 92nd birthday he gifted her memory with a book recording her travails during the holocausts. This book is based on the recordings but tells the story in a more organised manner.

Each Holocaust survivor has a unique and individual story. However, these stories didn’t end in 1945. They continue through to the present day. I am fascinated by how much you can learn reading story after story written by people who survived the Holocaust. Especially those people who went through concentration camps have stories that are similar but also unique. Their testimonies provide us with an understanding of how the events of the Holocaust have shaped their lives and the strength of the human spirit.

The writing is realistic but respectful and honouring the spirit of a grand lady. This book is so intense yet deeply touching book. the author uses such simple words, describing short scenes from her life, scenes that are sharp as a knife. It is a fine source of fact and an even finer source of compassion and those small and strong pictures stay carved in your memory for a long time after you read this book. The family connection gives it beautiful dimension because that is the most important thing. Had Risa not been such a strong woman, fitter and a survivor, Dan would not be here to tell her story. A inspiring account this traumatic yet powerful journey of hope, faith and love. It is a heart-warming read know all that Risa went through and knowing that she survived one of the darkest hours in human history and lived a full life after that.