Map of the Dead by Murray Bailey


Hello Readers,
Thank you, Murray Bailey, for sending me Singapore Boxer for free in exchange for an honest review
Spoilers

Disclaimer I have worked with Murray before. I have been lucky enough to receive a collection of books from Murray himself in exchange for honest reviews.  If you have followed my blog for a while you know I am a bit of history geek it is a hard tossup between the Greek history and Egyptology so when Murray messages me asking if I would look at his Egypt based book, I couldn’t say yes, any quicker. 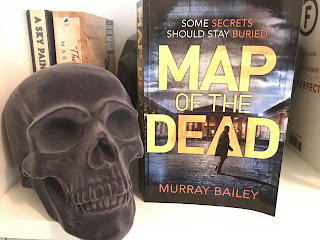 In this book we have a new main character called Alex. Alex’s former girlfriend dies in a “accident”, although it made pretty clear for the reader from the get go that this is not the case. Ellen was an Egyptologist about to make a major discovery that could change history. After he death Alex decides he is going to to try and complete the work that Ellen had become very excited about. There are people who will stop at anything to stop this discovery from becoming public.

Alex has to figure out the clues Ellen has left him as well as the people he can trust. His search eventually leads him to Vanessa, a reporter who has taken an interest in what he is doing. All while running from his pursuers, trying to stay alive while trying to figure out how to outwit them going across Egypt from Cairo to The Valley of the Kings and the Nile Delta.

This book kept me guessing who Alex should trust and shouldn't trust using my previous experience from Murray's books I have trust issues. The book is written mainly from the point of view of Alex, and partly from the point of view of an Egyptian boy. There’s a good climax as the clock ticks down in an ancient tomb before an explosion. The way the story snowballs makes Alex think of events and consequences: something small, spreading outward and becoming something else, something bigger.  The final shocking conclusion was a surprise and was delicately delivered I think this may have been to avoid offending religious groups.

As I have come to expect from Murray's books a lot of research has been done. There is an incredible amount of information communicated across in this book although the serious element is "pure fiction" in Murray's own words. Although the book is set in the present, there are flashbacks to 1,300 BC and a time of turmoil. This second story woven through this book is an ingenious counterpart to the main plot, explaining what happened to Nefertiti and suggesting what Moses’ role may have been. I loved this addition but history geek! Egypt is a land of rich culture and astonishing stories and has always fascinated me. So, this story mentioning Egyptian pharaohs, Royalty and mythology was a treat.  Also, the religious conspiracies referenced throughout the book are fascinating.

There are some new theories involved in this work, but the research behind them gives them enough credibility to add to the story. I really enjoyed this book with the race against time to solve the puzzle, the lurking danger.  I have to say, I enjoyed both the fictional historical perspective and the parts set in modern day and I can’t wait to read the sequel Secrets of the Dead.