A Time of Blood by John Gwynne


Hello Readers,
Thank you, Jamie and Pan MacMillan for sending me an eBook copy of A Time of Blood by John Gwynne for free in exchange for an honest review.
Spoilers (Just in case any jumped in)
Publication Date: April 18th 2019

This is the second book I have read by John Gwynne and I still have his previous series Faithful and the Fallen on my to buy pile (Larger than my TBR pile still). However, I was extremely lucky back in November as I was able to read A Time of Dread, the start of Johns new trilogy Of Blood and Bone. Now here we are in April and I have been lucky enough to get book two from the lovely Jamie. 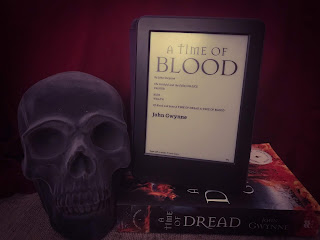 A Time of Blood is the second book in John Gwynne’s Of Blood and Bone trilogy and the story picks only a few days after A Time of Dread ends. Since this is a sequel, I will try not to delve into details of the plot and I won’t be dwelling on the characters for fear of spoilers. However, Like the first book, this book follows multiple perspectives.  Following on from the catastrophic finale of A Time of Dread, this is a high action, high tension read. We the readers are dropped straight back into the action and it doesn’t let up for the rest of the book. John has a wonderful talent for making his book page-turners, both books in this series are large (500 pages I think) however I start running out of book very quickly.  There are plenty of twists and turns to keep the readers glued to the pages and to keep you guessing.

John has built upon the foundations he established in the first book to implement a fast-paced and brutal sequel full of revelations, engaging dialogues, and bloody warfare. While following the standard sequel rules: bigger, bolder, bloodier we get the added bonus of all kinds of monstrous creatures being chucked in. Being the second book in a trilogy some might question whether A Time of Blood might have second-book syndrome, but John smashes this question with an epic character-driven tale of love, loss, hope and hate. John elegantly used this book as a platform to prepare the story for the concluding third and final book while making sure this book doesn’t feel at all like filler.

In A Time of Blood John has heightened the stakes and worsened the odds, and the peril deepens with every turn of the page while the plot comes at you thick and fast. Once again John showcases his skill as the battle sequences are epic without being bogged down by too much detail and are gripping to read. What you get is chapters ending in a cliff-hanger, scenes being built up, and terrific action scenes written with such brilliant precision. Even when there is a break in the action, the story remains engaging, because these sections are used to develop characters and their relationships.

John continues to build on a wonderfully vivid world, and it was great to see more of it in this instalment. Politics continue to play a part in the story, giving you more of an understanding of the world and how it works.  If you’re familiar with John’s work, you know by now that he’s brutal with his characters and he’s not afraid to torture or kills them off. This is also why I utterly LOVE his books because you know no one is safe and his work isn’t predictable. The characters are extremely well-written which means the atmosphere of danger in the battle scenes is tangible and the characters’ motivations for their actions felt realistic. You can’t help but feel a slight twinge of fear for the fates of the characters as you turn every page.

Overall this was a profound second book in a trilogy, and I cannot wait to see how things develop in the third and final book.
Lx