Down the Rabbit Hole: Curious Adventures and Cautionary Tales of a Former Playboy Bunny by Holly Madison

Today we have an audiobook this time we have Down the Rabbit Hole by Holly Madison. I listened to this book for the first time at uni because I remember catching the odd episode while I was growing up as my mum watched the girls next door TV show and I watched Holly’s World when Holly got her own show. 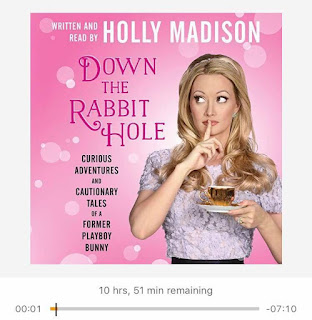 I’ll be honest I was fascinated with the behind the scenes look into Holly's life at the mansion so I was thrilled when I found out she had released a tell-all book about her time at the mansion. I was  curious to hear about the real story behind all the glitz and glamour and I wasn't disappointed. However, It was refreshing to read an honest perspective on the Playboy mansion and its sadly not all glitz and glam like others would have you believe. Holly explains why she seemed so Icey in Girls Next Door. Throughout the book, its her truth, a little Hefs truth, a little of the other playmates' truth and then reality somewhere in the middle of it all (if that makes sense it's all a little blurred). I loved the Alice in Wonderland quotes throughout this story and it is nice to read about what Holly has achieved.

Holly seemed to have it all beauty, money fame and  the kind of life most girls would have killed for so I found it surprising to see the other side while reading her memoir at just how trapped Holly truly felt by everything. I feel like Holly was telling the truth, and it was a little suffocating joining her for the ride. By the time she decided to leave, I was right behind her and lets be honest there’s only so much a person can take. Holly comes across as a compassionate but slightly two dimensional in places. obviously, there are 2 sides to every story but Holly appears to be painting herself to be a little whiter than white but it's her autobiography. I had seen a few accounts from “spurned” bunnies in the past and took a good portion of it with a grain of salt. How Holly managed to endure the daily negativity of living in the Playboy mansion and then turning it into a positive outcome is remarkable let alone making a success for herself outside of the playboy walls.

Holly’s fairy tale ending was heart-warming and there were a couple of important messages to young women that were unfortunately obscured a little by drama. Poor self-image is something a lot of us struggle with and Holly bringing to the forefront of this book is important and the little bit about men (Hugh Hefner and Criss Angel) belittling you is not love or a healthy relationship. Holly learnt this the hard way and It's slightly heartbreaking to read.

This book was an eye-opening account of the  behind the scenes, the manipulation, the strange bedroom arrangements and how much is fabricated for publicity and the cameras! A wonderful listen.