May 09, 2019
Hello Readers,
I am continuing Terry Pratchett week with Going Postal. This year for my birthday I asked for Reaper Man, The Colour of Magic, The Hogfather, The Fifth Elephant and Going postal in the new covers by Gollancz and Doubleday they are stunning. This is the second of the books that has been adapted for the TV. 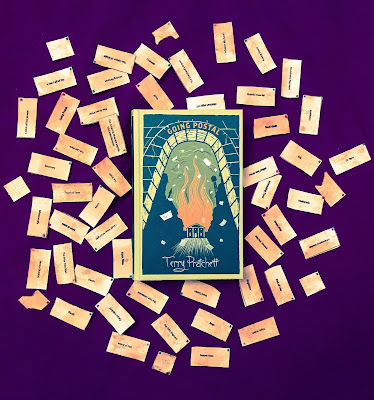 Going Postal takes place in the Ankh-Morpork region of Discworld. Moist Von Lipwig should have met his maker Instead, it's Lord Vetinari, supreme ruler of Ankh-Morpork, who promptly offers him a job as Postmaster. Since his only other option is nonliving, Lipwig accepts the position with escape and profit his end-game objective. However, This will be difficult, though, as a hulking Golem, Mr Pump, has been put in place as both protector and parole officer, just in case Moist was considering abandoning his responsibilities prematurely.  Lipwig has lived by his wits since he was orphaned, becoming a master manipulator of men and women. Turns out, years spent scamming and conning the public have excellently prepared Moist von Lipwig with the skill set needed to run a vast corporation.

The post office hasn't been open for 20 years since the advent of the Internet-like clacks communication system. A quick explanation of the clacks its a mode of communication in Discworld that is made up of a grid of eight shutters By opening and closing these shutters, that converts customers' messages to ticker tape which are then relayed from one clacks tower to the next through the city. Moist's first impulse is to try to escape, but Mr Pump, his golem parole officer, quickly catches him. The all but abandoned post office of Ankh-Morpork might be harder may be a near-impossible task.

The Post Office building has been poorly maintained by ancient Junior Postman Groat and Apprentice Postman Stanley the young and straight pin collector, both long out of practice. The place is also haunted by dead postmen and guarded by Mr Tiddles, a cat.  Every surface of the massive, labyrinthine building with mountains of decades-old undelivered mail clogging every nook and cranny of the broken-down post office building.  Worse still, Lipwig could swear the mail is talking to him. Oh, and one more last nail in the coffin of the worst thing that can happen, it means taking on money-hungry Grand Trunk clacks communication and the bloodthirsty Mr Reacher Gilt.

However, it isn’t long before Lipwig expands his staff by hiring golems to deliver the mail and demanded that all old mail be delivered, and, most importantly, come up with a new innovation called "stamps," which are essentially as good as printing money. Lipwig works out that he can set his own prices and undercut the clacks. With the help of the ever-present newspaper, the Post Office is doing roaring business in no time. The devious Clacks chairman Reacher Gilt sets a banshee assassin on the Postmaster, but only manages to burn down much of the Post Office building. The banshee dies when he gets flipped onto the sorting machine.

Lipwig makes an outrageous wager that he can deliver a message to Genua faster than the Grand Clacks can. "The Smoking Gnu", a group of clacks-crackers, sets up a plan to send a killer poke into the clacks system that will destroy the machinery Lipwig talks the Gnu out of this plan and opts for a more psychological attack on the Clacks. Through the use of an intermediate Clacks tower, he intercepts the Grand Trunk's message and substitutes his own pretending it is from the ghosts of the dead Clacks operators and which exposes the illegal activities of Gilt and his Board.

As much as the intriguing and at times hilariously baffling storyline will never lose your interest, it is Von Lipwig Junior Postman Groat and Stanley, Mr Tiddles and Mr Pump, and Adora Belle Dearheart who make this book brilliant.