King of Fools by Amanda Foody


Hello Readers,
Thank you, NetGalley and HQ Young Adult for the chance to read King Of Fools by Amanda Foody on ebook for free in exchange for an honest review
Spoilers 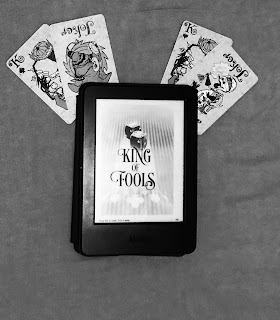 This is the second book I've read by Amanda Foody, the first was Ace of Shades the first book in this series. Ace of Shades was fast-paced, brimming with excitement and thrills, romance and violence, and sees the transformation of the female protagonist (Enne) grow from a naive young girl, into a brave, and potentially dangerous, young woman.

I was excited when I NetGalley approved my request for King of Fools I couldn’t wait to jump back into Enne world created by Amanda and to re-experience Amanda’s world building which is very complex yet easy to picture. I honestly still believe Amanda has a talent for edge-of-your-seat writing and when the story gets going it’s spectacular.  Amanda’s writing style holds you completely captive.
King of Fools starts off right where Ace of Shades ends.  After the Game of Shadows, there is a huge price on both their heads and they've both lost pretty much everything. Enne and Levi are wanted for murder and Vianca's son. With the Chancellor of the Republic dead, New Reynes is thrust into campaign season and there are two parties vying for power.

New Reynes is in chaos as it was during the revolution, and history has a way of repeating itself. Levi wants his gang back but after being challenged by his third and losing all their money he's not sure how to win back their trust or sort out their finances. While Enne, on the other hand, doesn't want the reputation, she's earned. Just like Ace of Shades we have the story told from multiple points of view: Enne, Levi, and Jac. Jac's perspective helped develop a new dimension for the other characters, specifically in my opinion for Levi.

Amanda entwines so much cleverness and un-subtle feminism throughout this book and I love it. I was a little apprehensive that this book would suffer from Middle Book Syndrome and I was wrong it didn’t. There is a lot going on in this sequel and there is never a dull moment. I adore how many strong female characters we have in this instalment. Not just Enne and Lola who I already knew and loved but also new characters like Grace, Tock and Sophia. Our female characters do not fall into the YA stereotype of a strong female, they like nice things, dresses, and romance books.

The ladies are strong and don’t need to be saved by men, and their struggles are more than their relationship with men. There is so much character development in this second book that sets us up for book three and we learn more about the history and politics of New Reynes. All of the characters become so much more than what they originally were, and Amanda's characterization of them made them feel like real people who make mistakes and occasionally do bad things. Everyone in this book is searching for something, vying for power of their very own.

Overall, I really enjoyed King of Fools! If you want a series that is fast paced, full of mystery, gangs, action, romance and intrigue then you're absolutely going to want to pick this series up. I'm already trying to work out who I need to sell my soul to get book three.