Hello Readers,
Thank you, NetGalley and Pan Macmillan for the chance to read this ebook for free in exchange for an honest review.
Spoilers
Publication Date: May 2

I loved Ash Princess as it is a darker book than the typical YA fantasy and it was a brilliant debut novel. Laura Sebastian did an amazing job of painting a picture of Theo’s (a.k.a. Theodosia, a.k.a Thora) world.  So, imagine how excited I was when I saw that the second book in the trilogy was available to request on NetGalley. 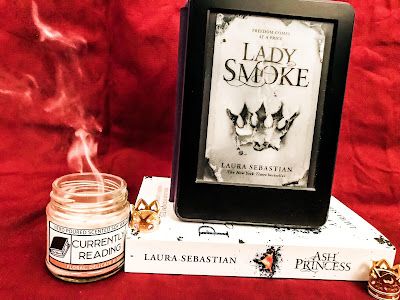 Before we delve into the book review quick mention that this is the second book in a trilogy so I was a little apprehensive when I requested it as there is always the chance the second book suffers from Second Book Syndrome. However, Lady Smoke exceeded my expectations and was a brilliant second instalment to the Ash Princess trilogy.

Lady Smoke takes place right after the events of Ash Princess where Theo escapes her homeland and is on a ship owned by none other than pirate Dragonsbane who happens to be Theo's aunt and Artemesia's mother.  Now that Queen Theodosia has escaped with her life and has Prince Soren as her prisoner, the next step in Theo's journey is to build an army to finally put an end to the Kaiser by trying to form an alliance with another country.  The only problem is, she has to take on a husband, something a queen has never done in Astrea. However, the pirate Dragonsbane has other plans in mind and they don't exactly line up with what Theo wants for her future. Theo soon realises it’s one thing to escape the Kaiser’s stronghold, it’s another thing altogether to tear it from his murderous grasp and take back her country.

I really appreciated the characters and their development throughout this book as Laura expands on their backgrounds and personalities of the characters we’ve come to love. As these characters fled from the Kaiser the geography of the land is revealed and we get to see more of the damage that the Kaiser has done. I loved learning more about this world and the unique politics that governed each realm. We see how far the Kaisers cruelty has spread his hate and that we aren’t just dealing with our little band of heroes any more we are dealing with entire countries who live in fear and poverty because they have been conquered by the Kalovaxians. It seemed the Kaiser is not the only unethical player in this world and Theo and her crew must once again concern themselves with the niceties court and the political scheming necessary to get their freedom returned to them.

Theo is being forced into forging an alliance through marriage which means forsaking what Theo believes in. In a sad roundabout way, Theo finds herself having to giving up her newly gained freedom in exchange for the men, arms and funds needed to take back Astrea. Despite became Queen Theo still has a lot of learning and growing up to do. Despite suitors pouring into Sta’Crivero, Theo is still not safe from the long reach of the Kaiser. Laura takes the book through a feminist arc that i loved and I applaud Theo for standing up for not only her country but for herself. As Theo calls into question the patriarchal system and the outdated traditions that further gender inequality, that are only accepted due to nothing more than being practised for years and being committed to memory.

The Theo we get introduced to in Ash Princess is a very different to the one that appears in Lady Smoke. Theo in Ash Princess was forced to live with her mother’s murder when her kingdom was overtaken by The Kaiser and her original desires were almost solely of self-preservation.  Which is understandable as Theo's mother, the Queen, was murdered in front of her eyes when Theo was 6, the country was conquered, the land was taken and resources pillaged. Theo was then humiliated and subjected to torture for 10 years under the “care” of the conquerors. But this once mocked Ash Princess is now determined to fulfil her role as Queen Theo, and this Queen wants her land back and her people freed her soft exterior has been whittled away to reveal a strength that will not allow her to become a plaything ever again.

Lady Smoke delves more into the idea of doing whatever it takes to do what is right even if it means giving up your pride and accepting help. Laura steeped this book with the embodiment of female empowerment and I have so much love for her for doing so.  I want these characters to succeed and honestly cares what's going to happen in the final book. I cannot recommend Ash Princess and Lady Smoke enough. This is one trilogy not to be missed!