Today I am reviewing Chernobyl the reason i have chosen to review it is because I honestly cannot remember a TV program that has affected me that much that I have to walk out (In a good way…Kinda).

Chernobyl is a five-part mini-series that aired on HBO (USA) and Sky Atlantic and Now TV(UK).  I am using a poster images I have found through google I do not own any rights and am using the image purely for review purposes (Fair use under the copyright act sections 29 and 30 under use for a review). 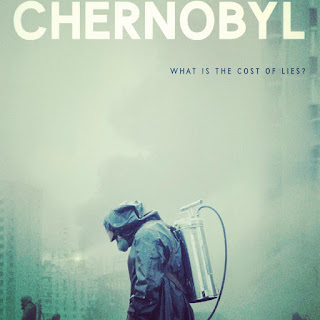 I know Chernobyl was the first event of its time and nothing like it had happened on this scale at that time but I can honestly say I have never been so mad watching an open episode that I have had to walk out. I know we now have the gift of hindsight and thanks to the horrific events that happened we now have better protocols but there is something about watching people deny the danger and having people with clear radiation burns being told they're overreacting because its “impossible” is heart-breaking and infuriating at the same time.

Chernobyl dramatises the 1986 nuclear accident and tells the story of the brave men and women who made unbelievable sacrifices to save Europe from an unimaginable disaster. This is a historical drama, not documentary and I think Craig Mazin (writer) was right to take slight liberties in order to reach the emotional truth of the matter but still manages to make it feel close to the truth I really don't think that much was over dramatised.

The series focuses on the story of the scientists, the engineers and the first responders involved in the disaster and its aftermath. Most major characters are based on real people and we also get to see the coal miners enlisted to clean up the radioactive site, the divers who plunged into the reactor’s depths and the men recruited to purge the town of any radioactive life still around (Yes, I mean pets).

Lyudmilla Ignatenko story is also explored through the series. Lyudmillas husband Vasil was one of the first firefighters on scene. Lyudmilla, was just 23 and pregnant when she watched as her husband die an agonising death from radiation poisoning and sadly, their baby died hours after being born. Some aspects of Lyudmila’s story have been accurately depicted on screen, such as her bribing her way into the hospital and being allowed only 30 minutes to see her husband. However, in the TV series Lyudmilla says she wasn’t pregnant, while in real life, she told the nurse that she already had two children so they let her in.

The cinematography is beautiful for instance, the series begins moments after the explosion that destroyed the reactor. It is a disorienting and captivating sequence that we experience just like the operators of the plant and we powerlessly follow along experiencing it along side them. Another brilliant theme throughout is the constant sense of foreboding reinforced by the Geiger counter noise in the soundtrack, at first you don’t seem to notice it at much but soon it's there and a constant. I re-watched the final two episodes and picked up it more the second time round.