Hello Readers,
Today I have another film review for you, I’ll try to keep it spoiler-free but let’s be honest to original came out in 1994 and it's pretty much based on Hamlet (just saying). Just like Toy Story, The Lion King is one of the Disney films that I'm always going to feel protective of as I've spent a good proportion of my life with its characters and songs. This latest live-action re-imagining seems bound for success thanks to a mixture of nostalgia and spectacle. Also I just want to smush cub Simba's face. 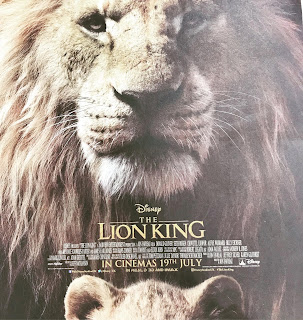 The first thing I will say is that the opening is exactly the same as the opening of the original, for me that was perfect it was like hearing the opening of Star Wars or Lord of the Rings It gave me a sense of being welcomed back. I have seen people saying they could have developed the opening but let be honest if it didn’t open with the sunrise people would be complaining more.

I loved the original and having James Earl Jones playing Mufasa again was such a great choice but I don’t think they really had another option. While we’re on the subject of Mufasa his death feels that much more tragic than the original and I think that is down to the live-action the fur looks so real you could pet it, is that much harder to take especially with baby Simba.

The story feels that much darker and I thought the themes were a little less subtle. Scar makes a point of saying he won’t challenge Mufasa again leading to the suggestion that he was one who gave Scar his namesake injury … okay, it may be obvious in the original but I’ve rewatched it and nope!

For a PG-rated film, the elephant graveyard scene is so much darker than it needs to be. I get it in the original its creepy and dark but too far guys, I found myself jumping and turned to my friend and said I was glad we didn’t bring her little girl with us and she agreed.

Timon and Pumbaa helped make this film amazing and was a real turn around after all the seriousness and darkness.  Don’t get me wrong I love Ernie Sabella and Nathan Lane but Seth Rogen and Billy Eichner did such a wonderful job and were just the right amount of funny.

That being said I also prefer Ed the hyena who was renamed Azizi in this remake and I love the interactions between him and Kamari who was originally called Banzai. The only hyena who kept their original name was Shenzi.

The soundtrack is as stunning as the first and I have been listening to it since seeing the movie on the 21st of July.  Hans Zimmer, who composed the 1994 animated version, has returned to compose the score for the remake with Pharrell Williams as a collaborator. Elton John also returned to rework his musical compositions from the original film before his retirement along with the original film's lyricist, Tim Rice. Elton and Tim also wrote a new song for the film's end credits, titled "Never Too Late" and performed by Elton.

The film also features all the songs from the original film, a cover of "The Lion Sleeps Tonight", and the song "He Lives in You" from the Broadway production. With an added song by Beyoncé called Spirit. The soundtrack, featuring Zimmer's score and John and Rice's songs, was released digitally.

Its honestly a good film and the advances in technology are evident but it just felt like something was missing and I don’t know if that’s because of my attachment to the original. Have you seen The Lion King yet? What did you think?