Thank you, Sarah, and Titan Books, for sending me a copy of Strange Ink by Gary Kemble for free in exchange for an honest review.

Before we get into my review, we are going to take a minute to appreciate how stunning this book is that simple black and white with a pop of colour on the cover is magnificent and black sprayed edges, I mean it could be more beautiful if it tried. The second book called Dark Ink will be published October 8th 2019 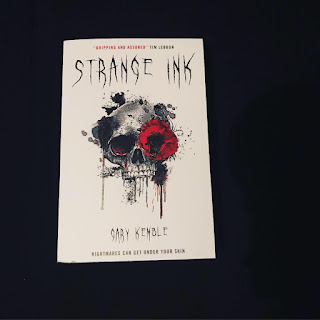 Just the concept of this book fascinated me poor Harry Hendrick wakes up to find a strange symbol tattooed on his neck. Harry thinks he had the tattoo done while drunk, but soon more tattoos appear along with violent nightmares. I’ve binge-watched enough tattoo fixers to know this can happen but the twist of having the tattoo linked to violent nightmare and more sent shivers up my spine.

Fed-up journalist Harry Hendrick was once a rising star, but his career was derailed and is now circling the drain in Brisbane. He’s meandering through life, a shell of his former self, until he goes to a friend's stags’ night and wakes the next morning with a hangover with a strange symbol tattooed on his neck. Harry has no recollection of getting the tattoo, his mate Dave can’t remember anything about them going for a tattoo, even photographs taken on the stag night reveal nothing and the local tattoo parlour denying any knowledge of tattooing Harry. It seems to have appeared out of nowhere.

However, this tattoo isn’t just a normal drunken tattoo. Harry has a nightmare, waking in fright and wondering where he is and this nightmare has just caused sweating a waking up oh no it is accompanied by another grisly new tattoo.  The tattoo depicts a scene from the nightmare this is followed by more tattoos and violent visions that seem to be tied to the war in Afghanistan that are becoming more vivid

Harry begins to realise that each new nightmare a tragic story is being told through the ink, through the images that the tattoos depict upon his skin. Harry suspects the nightmares and tattoos maybe someone else’s distressing memories. It is up to Harry to uncover the truth behind the tattoos and what happened to the person that they originally belonged to. Harry must solve the mystery they present before a depraved villain becomes prime minister.

The novel’s gritty realism and effectively conveys the discomfort of new ink, the uncomfortable heat of the Queensland summer, and the horrors of war and murder. As Harry digs deeper the story strands that at first appear to be disparate pieces all come together. Biker gangs, drugs, corruption, greed, the horrors of war, the water tower, politics and the presidential candidate all have their part to play in the dark narrative.

This is a wonderfully written book with an original premise could have easily gone wrong, but Gary handles it with such care and gives us a believable world and characters. This remarkable book is captivating from the beginning and is hard to put down. I couldn’t stop reading because stuff kept happening on nearly every page but not giving too much away. The pace is honestly remarkable it is fast yet not a single detail is lost. I would recommend this book to anyone looking for something a little different.