Today we're going to be doing something a little different, I’ve been lucky enough to travel and I thought I would share some of my favourite places I’ve visited. So this month I am going to be posting a travel post on Tuesday, I am being very original and calling it Travel Tuesday. The places I a going to be mentioning are Egypt, Spain, Tunisia and Cuba.

I have always been interested in Egyptology so when I was told we were going to Egypt I begged and pleaded to go to the Pyramids or the Cairo museum. Such a great plan until I was told we were going to Sharm El-Sheikh 511.0 km away! So we arrived at Sharm El-Sheikh and before the bus had even left the airport I was asking the rep if they did a trip to Cairo. They did and with a little help from my aunty, we booked the trip the next day to go in three days.

The trip included flights to Cairo and tours, the day of the trip we were up at 4 am, I have a confession I’m not the best flyer. Well, the plane we flew to Cairo in still gives me nightmares it was an old Russian plane, that looked like it was held together with tape!! There was actual duct tape on the wing and a couple of seatbelts that didn’t actually fasten, I swear it was the longest hour of my life.

The Great Pyramid of Giza is the only remaining survivor of the Seven Wonders (Anyone else hear Stevie Nicks just then) of the Ancient World and is a UNESCO World Heritage Site. I honestly believe that if you ever get the chance to visit the Pyramids you should. Nothing will ever compare to the feeling of wonder when standing next to something so large. The pure size, scale and wonder of how defies all our logic this place has to be seen to be believed.

Also, while you’re visiting the Pyramids at Giza you can see the Sphinx. Sphinxes are old mythological creatures who have the body of a lion and human head. The biggest monolith statue in the world, this reclining sphinx is thought to depict the Pharaoh Khafra and guard the pyramids. 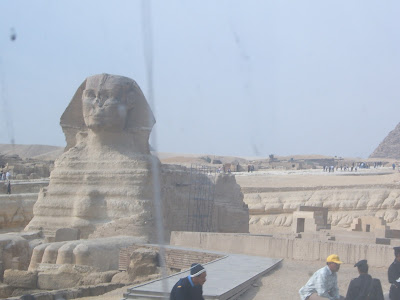 One thing I wish I had known before I visited was that yes, it’s amazing to going inside a Pyramids and being able to say you have. I do have just a little warning it is hot, steep and narrow and claustrophobic. There is a medley of beautiful chaos between the Pyramids and the hustle and bustle of the mass tourism industry. The only downside is even if you go with a guided tour you will be hassled for taxis, camel rides, tours and souvenirs.

The Egyptian Museum in Cairo was more than I thought it could be, coming face to face with Tutankhamun’s death mask was magical. One thing I would like to say is I didn’t see Tutankhamun’s mummy as the mummy was on loan to The British Museum (Typical!). However, we paid extra to visit the mummy room and I saw Ramesses II (His head still has quite a bit of hair on it) and the yet to be identified, KV60 mummy. I know it’s kind of morbid but it is also fascinating I never in my life thought I would be looking at a real-life mummy there is also something unsettling about being surrounded by them but I blame that on The Mummy films (thanks to Brendan and Rachel). The only thing that still upsets me to this day was that even with a bribe like the people in front we were still not allowed to take our cameras into the museum despite them being allowed. 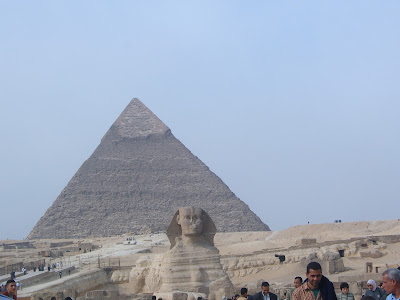 To finish off just a little reminder to do some research before you travel and check out any rules and regulations and remember to try to be as culturally respectable as you can.