This one is personal and were going in deep. I have had this post written up for a while but I am finally going to share it. This obsession on whether people menstruate or what they have in their pants needs to freaking stop!!

So more so over the last couple of months, I have seen more comments about what it means to be a woman. Someone who will not be named commented “People who menstruate’. I’m sure there used to be a word for those people. Someone help me out. Wumben? Wimpund? Woomud?” Ever since this comment has surfaced it has become very clear that I am not a woman. 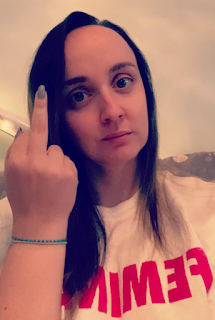 If you hate trans and non-binary people just say it don’t go hide behind some flimsy excuse you got of some fuckwit writer. Before people jump down my throat, I have read the essay it was pointless and I’m going to do the same thing here just with fewer words.

Periods do not invalidate trans men and non-binary people! Every time she has made her comments, I have seen more and more trans and non-binary people get harassed! How is that okay? She has personally opened the floodgates to a barrage of attacks online. I know periods aren’t the main focus but people need to realise by pushing this statement to the point they are you are hurting the women you are “Defending”.

This comment has set off a snowball of comments and opinions that only women who menstruate are women. Buckle the fuck down while I rip this shit apart!! I am not defined by my ability to have a fucking period! No woman is. Why are people so obsessed over this? If a woman at 18 needs a hysterectomy for medical reason is, she no longer a woman after that point?  Where do I fall? Cause by your logic I am not a woman?

It took me three years to get a diagnosis even then I didn’t fit nicely into a box of Endometriosis or just cysts. So, my life became more about pain management which took another year and a half to control. I had to leave my second year of university because I missed so much because I spent so much time in and out of the hospital.

Now for anyone who is going to sit and go “Awwww she just has a bad period”. Sit down! I would leak through most menstrual products and couldn’t leave the house. I wouldn’t be able to move, eat or do anything other than sleep. One hospital visit my body was that stressed out I had to be hooked up to an ESG with a defibrillator next to me for two days because my heart was freaking the hell out, I was 19 do you know how scary that is.

My doctor was getting that worried about my health and the stress on my body that we had started the conversation to start the process of getting a hysterectomy. It wasn’t until a specialist visited that we manage to save my ovaries and get a treatment plan that works.

We had everything under control until four years ago. That was when my appendix went funky big time now seeing as I have a history of “tummy pain” and cysts it took four days for them to work out it was actually my appendix. Yes, I was in hospital but do you know how dangerous it could have been mine almost burst. Even after reading through the paperwork that just said appendectomy and signing they then told me that if once they got in there it was my ovaries, they would be taking them. I was 23. I still remember waking up and grabbing my tummy to check for drains to check what had happened.

So here I am four years later I don’t have periods! I am still a woman! I have people I know who haven’t been as lucky and have had a hysterectomy where do they fall. You don’t get to invalidate them like that. It’s hard enough mentally as it is.  In a society that is still so judgemental on a someone’s ability to have a child you’re just adding to the internal battle they are facing not “defending”.

Once more for the people at the back If you hate trans and non-binary people just say it don’t go hide behind some flimsy excuse you got of some fuckwit writer. Also, why the fuck are you on my blog this is an LGBTQ+ safe space and always has been! Periods do not invalidate trans men and non-binary people! You are also not defending women you are putting them in a box!