The Ghost Tree by Christina Henry

I would like to say thank you to Titan and Netgalley for sending me an ebook copy of The Ghost Tree by Christina Henry. My copy didn't have a pretty cover so here's one I found this image is being used under copyright law of being used for purpose of review 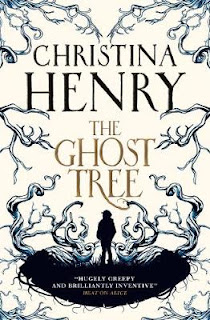 I am already a huge Christina Henry fan and I couldn’t wait to get my hands on The Ghost Tree and I wasn’t disappointed. Smith's Hollow is not a place I'd like to visit, as it is filled to the brim with creepy children, grisly murders and some major witchy vibes.

Christina Henry gives us a coming of age story with a young female protagonist in a small town horror setting. In what is meant as a huge compliment this book reminds me of IT by Stephen King once it became clear that people in the town were somehow being forced to ignore or forget, what was happening it was pretty hard not to be reminded of Pennywise and the power he had over the townspeople of Derry. Set in the 1980s, the story revolves around teenage Lauren, this book is an account of monsters, violence, and a curse laid on a provincial town and all its residents.

Lauren is a great lead. She's having to deal with a lot following since her father was found brutally murdered and no one wants to talk about his death or how it happened. Lauren has had to grow up fast and has a level of maturity that is sometimes lacking in books focusing on teen heroes but she never feels like a spoilt or angry teen. Lauren seems to be your typical teenager and has hit that age where she’s afraid that she is being left behind by her best friend in favour of boys and makeup. There were some truly relatable moments (maybe it’s a Lauren thing) like her straining relationship with her oldest friend, and worrying about boys.

Miranda has become more interested in clothes, make-up and boys, and no longer wants to hang out with Lauren at the old ghost tree. Miranda is a bit of a nightmare, she’s selfish, impulsive, obsessive, but she's still very real, and despite being written as a bit of a bitch, for the most part, you do understand her a little and feel sympathy for her at times.

The titular "Ghost Tree" in the forest has always been their place to meet but since Miranda has other interests, Lauren goes alone after the remains of two teenage girls are found in pieces in a neighbour’s yard. Lauren has a vision of a monster dragging them through the woods, she knows that she will have to be the one to do something no matter what anyone else believes. what's unravels is a grim narrative of the secret the residents of this small town have been maintaining unknowingly for years.

I read this book on my Kindle over a weekend and when I finished, I was shocked to learn that it was over four hundred pages long. There's no denying that Henry has beautiful prose. This book is captivating, exciting page-turner, the chapters are short and sweet, unravelling bits of mystery enticing your attention and you cannot put it down. One of the best things about this book is that the characters are so layered and complex and that no one is really all bad and perhaps everyone is just a victim of the events of Smiths Hollow.

I will always champion Christina Henry's writing, in the case of The Ghost Tree I highly recommend it to anyone who's looking for an easy to read, fast paced book that is creepy and gives off the small town secrete vibe.