Army of the Dead Film Review

Today I have a film review for you guys, a film that seems to be very marmite amongst people I know. There is going to be some spoilers in this post sorry in advance. Mentioning that the film is like marmite I actually really enjoyed it, what can I say I’m a sucker for intelligent zombies. Also, ZOMBIE TIGER! I am about to let rip a load of spoilers. In this post I am going to be using poster images I have found through google I do not own any rights and am using the image purely for review purposes (Fair use under the copyright act sections 29 and 30 under use for a review). 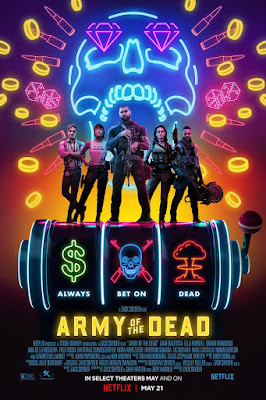 I think I may have liked the movie for all the wrong reasons for one the opening credits made me laugh. There is something funny about a cover of “Viva Las Vegas,” being the backing track to a montage of the carnage that would happen in Vegas in a zombie apocalypse. You have topless zombie showgirls devouring a man in a bathtub; zombies turning casino floors into their playgrounds, the seasoned gambler unfazed by his surroundings; the military comes in to get out as many survivors as possible before the entire city is walled off.

This movie perfectly shows how messed we are as humans, from lying, manipulating and the need we have to kill or attack what we don’t understand.  A perfect example of this is how the more intelligent zombies are quite happy living in what used to be Las Vegas minding their own business and even allowing humans to explore the outer perimeter of their domain with a little sacrifice.

For me, there is a clear split in the film where it goes from stereotypical zombie to something else and that is with the murder of the Queen at that point everything changes. Zeus then becomes intent on actually hunting the humans down. This is such a Wednesday Addams sentence but I thoroughly enjoyed how each member of the crew was picked off one by one in creative ways.

Mentioning the Queen and Zeus I have one tiny little gripe. How in the hell did she get pregnant! Like this is my one issue with the whole film. I may have had a slight reaction brain while watching this film but how? Zach, I need to know. Your zombies are pretty decayed and it is clearly Zeus’s child which does imply zombie sex. 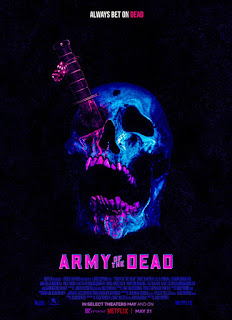 The ending of This movie is pretty great a huge show down between our hero and the “monstrous” Zeus! The monster is slain our hero get to live happily ever after… oh wait he got bit and is shot in the head by his daughter. But that’s not the ending we have a bit to go and it's honestly just as tragic. I think it was a big move by Zach to not have a happy ending he could have easily made it and they all lived happily ever after and taken a lazy exit but instead, he chose to show everything is not always sunshine and rainbows.