A Touch of Darkness (Hades & Persephone, #1) by Scarlett St. Clair

Look at this an actual book review! Surprise! I have been reading a lot as I was housebound for months while they worked out what I was allergic to. I didn’t really make any notes so the books I enjoyed have been reread and now ready to be shared with the world. Also google imaged this cover it's way to pretty to be shown on my kindle screen. 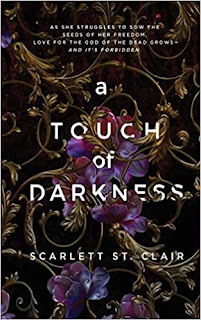 I am a bit of a history buff and thought that ancient Egypt and Egyptology was the reigning titleholder but Greek gods are currently the champion. I adore this Hades and Persephone retelling.

This book when stripped down to its barebones is a wonderful “coming of age” re-telling of the myth of Hades and Persephone in a modern setting and possibly one of the best retellings of Persephone and Hades that I’ve read. Scarlett has woven her magic and twisted the myth to fit perfectly with our modern world. I absolutely adore the world-building and the mixture of the modern and ancient worlds have been blended seamlessly. The beautiful descriptions of the scenery will make you want to move to the underworld or New Athens. The way Scarlett writes her relationships, either platonic or sexual, you immediately feel connected and wanting more.

In New Athens, the gods live on earth as Celebrities. Some live in the limelight, socking up all the praise and worship from adoring fans. Quick shout out to Hermes! Scarlett’s Hermes is the best and I want to be in his friendship circle badly. This book takes you on a journey through hopes and fears and how the gods are not that much different from mortals.

After a chance encounter with Hades, Persephone finds herself in a contract with the God of the Dead and the terms are impossible: Persephone must create life in the Underworld or lose her freedom forever.

Persephone is young, looking for adventure and something she can call her own after living in her mother’s Demeter’s shadow. Demeter has hidden her daughter from the other gods and much of the world. Persephone is finally let out from under Demeter's thumb and lands her dream job an internship at New Athens News. Persephone has a lot she has to fight with she is constantly torn between her feelings, her controlling mother and the need to be validated. Also, without spoilers, I am exasperated with Demeter like calm down and breathe.

Hades is dark, full of regret and no hope. This will be slightly biased but he is the perfect misunderstood villain who you loved from the beginning. Scarlet has done a wonderful job in her portrayal of Hades; his internal conflict is palpable. Hades is notorious for being cruel but behind this façade, he is a genuine and kind person who tries to provide the best for his people.

What makes this retelling so different I hear you ask well this book is a beautiful creation of forbidden love, lust, destiny, betrayal and ultimately growth. If you're someone who struggles to understand rules around mythology do not be put off by this book. Scarlett has created a world that it’s extremely easy to wrap your head around the mythology and a reader can easily submerge themselves into this world. I can honestly say I couldn’t recommend this book more if you enjoy Greek mythology, romance or enemies to lovers. Let me know if you would like me to review book two and three in the series.