I have recently found love while watching the tv programs I watched growing up there is something so homely about these series and they still feel like a warm hug. I thought it would share them with you to see if you get the warm fuzzys too. In this post I am going to be using poster images I have found through google I do not own any rights and am using the image purely for review purposes (Fair use under the copyright act sections 29 and 30 under use for a review). 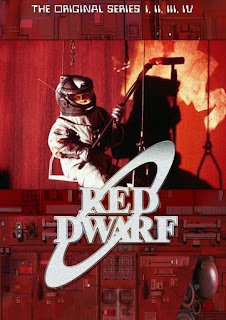 Red Dwarf follows a group of very distinctive characters marooned on a spaceship three million years in the future and it was a show that combined two genres comedy and science-fiction. We are introduced to Dave Lister the last human alive, Arnold Rimmer a resurrected hologram, the Cat the sole survivor of a race of humanoid felines and Holly the ship's increasingly senile computer AI. We also get Kryten the house-proud and unable to lie mechanoid. I honestly love this series and it never fails to make me laugh. If you love Red Dwarf the audiobooks are decent. 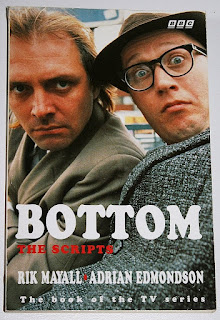 Eddie and Richie are two pathetic and slobby flatmates living in a filthy, damp flat in Hammersmith, London. They spend their time concocting desperate schemes to convince women to have sex with them, including buying sex spray, forging money, and pretending to be aristocrats. Their plans however are never fruitful and the stress of their miserable lives can cause them to argue and fall out. I love a good old bit of slapstick comedy and this series hits the nail on the head. There is also a couple of live shows that have some great live mess up and its great seeing them try make each other slip on live. 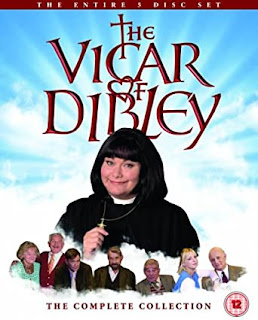 When their vicar passed away in the middle of a service, the inhabitants of the small Oxfordshire village of Dibley expected the replacement to be another old man. It turns out he didn't have a beard or bad breath, but he was she and the best Vicar ever… Geraldine Grainger. In ensuing episodes they "try her out" to see if she'll be as good as a the previous male one; and then in the later episodes the plot focuses around the lives of the villagers as Geraldine becomes an integral resident of the village. It’s a bitter sweet thing to watch now as I think only two of the orginal cast are still alive Dawn French and James Fleet. 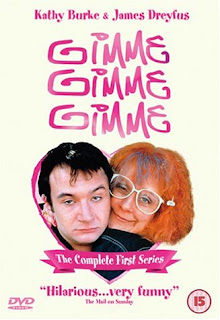 This series focuses on two dreamy London roommates: gay unemployed actor Tom Farrell, whose career is going nowhere; and Linda La Hughes, who has delusions that she is gorgeous and will start a grand romance sometime soon. There’s a laugh a minute as we watch feckless flatmates Linda and Tom try and work out which one of them spent the night the hunky man they find in the kitchen one Saturday morning. I have fond memories of watching this with Mother Goose probably way to early that I should have done even then with the jokes going over my head I remember laughing. 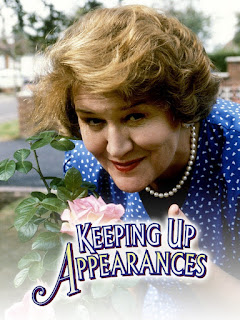 Hyacinth Bucket claims her surname is pronounced Bouquet despite her husband Richard protests and saying "It was always 'Bucket' until I met you!"  is a domineering, social-climbing woman’s whose main mission in life is to impress others with her sophistication and feigned affluence. Despite originally coming from a lower-class background, she pretends to be a sophisticated and well-versed woman however she is terrified that her background will be revealed, and goes to great but comedic lengths to hide it. Hyacinth regularly competes with her middle-class neighbours. Hyacinth also tries to impress people with the intellectual prowess of not only herself but her beloved son Sheridan and  boasts about how often he writes and phones her.  I don’t know why I love Keeping up appearances so much maybe Hyacinth reminds me of someone but she just feels so homley to me.