Today I have a film review I found this little gem on Netflix and thought I would give it ago and I was not disappointed. In this post I am going to be using a poster image I have found through google I do not own any rights and am using the image purely for review purposes (Fair use under the copyright act sections 29 and 30 under use for a review). 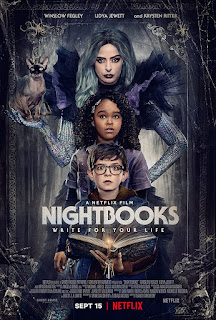 I have only do it again I have seen the film before I’ve read the book, the series is based of the 2018 book of the same name by J. A. White.  I will give a heads up like I can watch horror films like the It: Chapter two does not bother me but there where bits in this film that made me jump.

The movie does not waste time throwing its protagonist, Alex a young writer into peril. Alex’s passion for the horror genre has made him an outsider amongst his school peers, which leads him to take down a bedroom full of posters for movies such as “The Lost Boys” and other classic horrors. Why mention ‘The Lost Boys’ well this film uses a couple of songs from the movie, and I am living for it, I will die on the mountain that is has one of the best vampire movie soundtracks ever! Also, in case any youngsters read this be different do not let bullies try make you fit into a mould if horror is you living your best life go for it!

Back to this review, the movie begins with Alex in distress having been driven from the safety of his Brooklyn apartment by his own overwhelming emotions. Alex is lured into a magical apartment by evil witch Natacha, played by a terrifying and capricious Krysten Ritter. I adore the look they have given Krysten as the witch and I would happily own and wear some of the outfits also if someone wants to come do my make-up like that daily I would be grateful. The apartment is full of disturbing old dolls, dust, cobwebs, and gloomy lighting. An old TV flickers and plays The Lost Boy and a slice of pumpkin pie appears, and he takes a big old bite of it, and he is out cold. Children really need to be told the Grimm tales just saying.

He wakes up in the company of a Natacha, who gives Alex an ultimatum be useful to me or die (seems fair to me). Alex convinces her of his value by mentioning he creates and authors scary stories. Natacha allows Alex a chance to prove himself and demands he will tell her a scary story every night with the conditions that the stories should have no happy endings. this might just be a me thing, but I found it rather hilarious at how much of a tough critic she is by saying stuff like “everyone knows it takes days for fangs to grow” it just added a layer to this film that I though was just a nice touch. She is a supernatural witch of course she knows these things and is annoyed others do not.

Thankfully for poor Alex he is not alone in the apartment There is Yasmin, a slightly older girl who has been left understandably cynical from her much longer imprisonment as Natacha’s plaything. Yasmin is such a great character you cannot help but feel for her as the film reveals her story you can see why she is so guarded and why she acts the way she does. Alex I could have left with the witch she does not seem that fussed by him however Yasmin seems to get the main brunt of her outbursts and I wanted nothing more than to help this poor child escape. There is also a hairless cat named Lenore who can turn invisible, like who does not was a cat that turns inviable.

This film is a brilliant take on the Grimm fairy tales people seem to have forgotten how gruesome the tales where and this film acts as a stark reminder. I think it’s a great watch and I am glad I found it.