The black flamingo by Dean Atta

I have been lucky enough while in time out to read a lot more than normal and have managed to make a huge dent in my ever-growing TBR pile. This might be one of them reviews that might turn into a love letter to the author and I would say I’m sorry, but we all know I’m not. 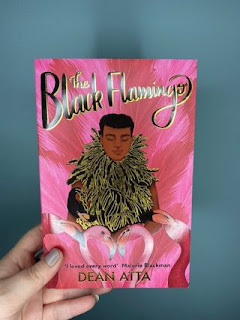 The black flamingo is a beautiful, real story told with all the grit most of us actually experience in life. Michael is a mixed-race gay man struggling to find acceptance from the outside world and from within. Michael’s blackness and the experience of having Greek/Cypriot mother and black father who deserted them was fresh and insightful.

There was one particular nugget in this book that broke my heart a little and it was a clear reminder of the privilege I have. This book educated me on the how decisions made by a parent, even with heartfelt and good intentions can cause a child to feel left out of their heritage which to me is heart-breaking. A good example in this book is society tell Michael he is not black he is mixed, is it any wonder he feels like he doesn’t belong? Its tear-jerking. I know it’s not the same, but I was brought up to love my Irish heritage and was told the folktales and to even think of some having that taken away from them, it just hit a little close to home. This book has numerous insights on what it means to be a man, the gay identity, friendships, belonging, family and race and it leaves you feeling completely raw after reading it.

What made this book unique to me is that this story starts in young childhood and smashes the stereotype that children don’t know their sexuality. This book touches on numerous important topics and yet it manages fill each chapter with so much emotion 8that once I picked it up, I didn’t put it down until I had finished it. The black flamingo is written in verse and uses mix mediums of text messages, notebook entries and includes some of the most beautiful illustrations I have seen in a while. I

there is not a single page in this book that won’t have you feel intensely for Michael and how so many of the events in his life don't go as he planned. The whole way through you just want to give him a hug. Michael’s own realisations about the colour of his skin alongside his sexuality were thought-provoking and poignant. Dean isn’t afraid to have his character admit to having their own preconceived conceptions about certain things and the poem ‘Some men have vaginas’ just summed that up. Seeing Michael become his true self and cast-off other people’s opinions and eventually being drawn to drag and becoming himself was engaging read.

The final poem especially was an experience and was just a perfect ending.