Today I will be reviewing The Craft Legacy I was way too excited for this to become a thing. One thing I will say The Craft is very much a 90s film and from a fair number of reviews I’ve seen people basically wanted the old movie rehashing. Like why? In this post I am going to be using poster images I have found through google I do not own any rights and am using the image purely for review purposes (Fair use under the copyright act sections 29 and 30 under use for a review). 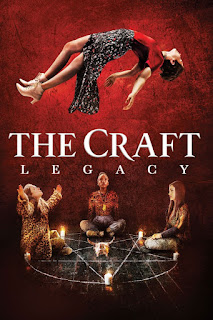 This is very much a modern day take on the craft and I think if it was for the film from the 90s now being classed as a cult classic it would have stood a much better chance at the box office and with reviews. The movie pours a number of difficulties teenagers and young adults are going through in society today and was very thought out and *crafted* well into the plot.

Personally, I was more excited about jumping back into the world of The Craft and anyone needs a fourth hit me up. Yes, this film is set in the same universe and has some easter eggs from the first film, but I think you can watch it as a standalone and things will still make sense.

The continuation of the story, rather than a remake expected by many (yes, it’s the last time I’m going to being that up I promise) Zoe Lister-Jones gives the film a full 2020 spin, highlighting the importance of embracing intersectional female power while being aware of the dangers of toxic masculinity.

No, I’m not getting on a high horse even from the trailer you know this film was going to be a little feminist and be tackling toxic masculinity as it showed the stereotypical masculine response to a lady flooding on her period. This film as deserves massive praise for LGBTQIA+ themes and messages were clearly developed and not used as just a throw away story.

As with its predecessor, The Craft: Legacy is led by a new girl this time, it’s Lily moving with her mother to live with her boyfriend and his three sons, met with a tense male frostiness at her new home. This leads her to meet Frankie, Tabby, and Lourdes after they come to her aid in the bathroom. History slightly repeats itself and they see her as a potential “fourth” to complete their coven.

One message I took more from this film than its predecessor and that is women can be powerful too and are stronger together, than against their fellow sisters. The social commentary was refreshing. I also appreciate the unique perspective of witchcraft and darker aspects in this film it wasn't super predictable aesthetic wise by copying its big sister.

I think this film is worth a watch and not only if you have seen the orginal movie, just give it chance.