Thank you, Harper Teen, for sending me a copy of Milo and Marcos at the End of the World for free in exchange for an honest review. 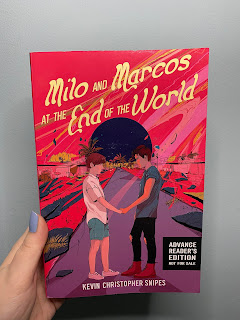 As soon as I saw this book in the newsletter and read the blurb, I had everything crossed I would be luck to receive this book. Thankfully the book Gods were listening. Milo and Marcos at the End of the World is a story of love, acceptance, and growth and captures the many depths of religious guilt in regard to queerness well and still manages to tell a beautiful but painful love story.

Let’s talk about the elephant in the room the religious aspect in this book and if I’m honest with you dear reader I am not the most religious person, so I won’t be delving into that side too much. The book itself isn't religious, rather the MC (Milo) is, and I think that's an important distinction. Kevin has done an excellent job making it a part of the story without making it *the* story. It doesn’t villainize Christianity nor does it praise it either. There were discussions of internalized homophobia and racism and how problematic organized religion can be. The protagonist Milo struggles extensively with accepting his queerness due to the homophobia his parents and the Church inflict upon him and at times it almost made me cry reading Milo's internalised self-hate/homophobia.

I really enjoyed reading about Milo’s inner monologue as an I could relate to a degree about his anxiety and self-sabotage. The explorations of internalised homophobia and seeing the main character's growth and progression and how getting out of that mindset isn't a linear progression.

I would just like to say that Milo and Marcos' relationship was too adorable for my little stone black heart. Both Milo and Marocs have different beliefs and motivations, and their relationship is messy, but it felt authentic. What do you mean by authentic I seen your eye browns pinch in question? The romance feels genuine, even from the start it extremely clear this is more than just a throw away romance arc, it's discovery, it's exploration, and it's choice.

Even with Milo’s struggles being intensified by the fact that every time Milo and Marocs have an intense moment, such as their first meeting or their first slow dance something world ending happens. However, despite the world ending moments the loveable moments filled my heart with love and seeing how Marcos could bring Milo out of his "shell" was very wonderful.  As much as I hate the term Milo and Marocs have feel like soulmates and I hate how cheesy that sounds, but they were so cute.

I also really loved how the pacing was done especially the whole world-ending aspect. Kevin uses the world ending not as a throw away trope but as a reminder of the very intense stakes. He does this expertly by having the “events” happened often to move the story along but not enough for it to distract from the true heart of the story: Milo and Marcos's relationship.

If I’m totally honest I wasn’t expecting the book to be this heavy and that isn’t a bad thing. I'm happy it was as I'm not quite sure I've read something quite like this. Kevin has done a wonderful job of showing how his characters comes to terms with themselves and the realistic brutality that it doesn’t matter if friends or family aren’t supportive or are, it’s still hard figure life out. I believe that this book is an important one and I’m very lucky to be able to read such a diverse book without the worry of any book restrictions.