I can say this because I am the same age as the orginal film… I have waited my whole life for this sequel, and it did not disappoint. Just going to put in a SPOLIER WARNING for anyone who has not seen it yet.

I am using a poster images I have found through google I do not own any rights and am using the image purely for future review purposes (Fair use under the copyright act sections 29 and 30 under use for a review). 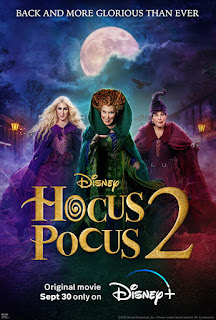 Both the opening sequences for the orginal and the sequel are similar, and I was there for all the nostalgic feels. Just like its predecessor this film starts in the past way before our three favourite witches were lynched. This film starts in 1653 and the origin story of the young Sanderson sisters annoying the prudish townsfolk of Salem, Massachusetts.

The Sanderson Sisters played by Bette Midler, Sarah Jessica Parker and Kathy Najimy aren’t the only original characters who make their magnificent come back in the sequel. Winnie’s “long-lost love”, Billy Butcherson AKA the one and only legend that is Doug Jones, is brought back from the grave, once again.

I have seen some comments on social media how similar the first and second film are. Whiles it’s true that Hocus Pocus 2 does retrace some similar plot points that were explored in the first film, it doesn’t do so without purpose. Let’s just remember that Hocus Pocus is a cult classic, and I honestly don’t think it was a film meant to amaze, it was made purely to be entertaining and watched at least once a year. When the cold nights roll in and the leaves start to turn, I must have the nostalgic feels of rewatching this film. Hocus Pocus 2 achieves its goal of recapturing the magic of the classic film with a fresh innovative approach and keep things familiar and not tedious.

Not focusing on Hocus Pocus for a second but sequels in general. Any sequel has the challenge of following its predecessor and having the pressure to preserve enough of the original story and characters to keep the hardcore fans happy without being too repetitive or confusing for any newcomers. For me personally “Hocus Pocus 2” gets that exactly right and it was like meeting an old friend.

The fact that Bette Midler, Sarah Jessica Parker and Kathy Najimy are reunited to run amok (amok, amok, amok) and they relish in the opportunity to revisit these characters. You can honestly see they are having fun and I was loving every minute of it with them. Whether you are a new or old fan you are in for a treat with new musical numbers, lots of camp & spellbinding fun. Bette, Sarah and Kathy bring their classic charm and black magic to carry this whimsical adventure without skipping a beat. The first movie was about the relationships between brothers and sisters with a sprinkle of teenage romance while this second film is about friendship.