Book I can Reread - Part Two

Today I’m going to be sharing part two of books I can reread time and time again; I suppose you could call them my desert island books. Check out part one here.  The reason I have picked these books specifically as I reread them at least once a year and I just love how homely they make me feel.

The Legend of Sleepy Hollow by Washington Irving 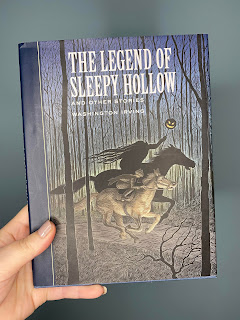 Plot: Set in 1790 in the Dutch settlement of Tarry Town in a secluded glen called Sleepy Hollow. It tells the story of Ichabod Crane, a lean, lanky, and extremely superstitious schoolmaster from Connecticut, who competes with Abraham "Brom Bones" Van Brunt, for the hand of 18-year-old Katrina Van Tassel, the daughter and sole child of a wealthy farmer, Baltus Van Tassel. As Crane leaves a party he attended at the Van Tassel home on an autumn night, he is pursued by the Headless Horseman, who is supposedly the ghost of a Hessian trooper who had his head shot off by a stray cannonball during "some nameless battle" of the American Revolutionary War, and who "rides forth to the scene of battle in nightly quest of his head". Ichabod mysteriously disappears from town, leaving Katrina to marry Brom Bones.

Thoughts: I think I will always have a soft spot for The Legend of Sleepy Hollow as I have been entranced by its ghost stories and haunting atmosphere. It’s easy to see how the legend has bewitched imaginations of its readers for the last 202 years and it’s not just for Halloween. I did notice rereading this book as an adult is it turns out Ichabod Crane is a rather icky character. Also, while rereading The Legend of Sleepy Hollow as an adult, I realised how mean I have been too poor Brom, and I appreciate him as a character more and was a little harsh.

Interview with the vampire by Anne Rice Plot: This is the story of Louis, as told in his own words, of his journey through mortal and immortal life. Louis recounts how he became a vampire at the hands of the radiant and sinister Lestat and how he became indoctrinated, unwillingly, into the vampire way of life. His story ebbs and flows through the streets of New Orleans, defining crucial moments such as his discovery of the exquisite lost young child Claudia, wanting not to hurt but to comfort her with the last breaths of humanity he has inside. Yet, he makes Claudia a vampire, trapping her womanly passion, will, and intelligence inside the body of a small child. Louis and Claudia form a seemingly unbreakable alliance and even "settle down" for a while in the opulent French Quarter. Louis remembers Claudia's struggle to understand herself and the hatred they both have for Lestat that sends them halfway across the world to seek others of their kind. Louis and Claudia are desperate to find somewhere they belong, to find others who understand, and someone who knows what and why they are.

Thoughts: I really like Anne Rice's writing it is so beautiful, enchanting, and pure gothic-vampire horror but described in a way where the characters are still very human with emotions and their own unique personal problems. I enjoyed this from beginning to end. Also, slight side not I only tend to reread Interview with the Vampire not all 15. Having reread Interview with the vampire recently. One thing I thought I imagined was how homoerotic the book was, and the film just glazed over all the gay vampires. I didn’t realise how much of the back stories of characters have been changed especially in Louis’ case. Why where the backstory change is an endeavour to solidify his heterosexuality. 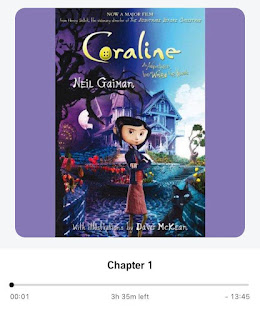 Plot: The day after they moved in, Coraline went exploring.... In Coraline's family's new flat are twenty-one windows and fourteen doors. Thirteen of the doors open and close. The fourteenth is locked, and on the other side is only a brick wall, until the day Coraline unlocks the door to find a passage to another flat in another house just like her own. Only it's different. At first, things seem marvellous in the other flat. The food is better. The toy box is filled with wind-up angels that flutter around the bedroom, books whose pictures writhe and crawl and shimmer, little dinosaur skulls that chatter their teeth. But there's another mother, and another father, and they want Coraline to stay with them and be their little girl. They want to change her and never let her go.

Thoughts: The Other Mother is one of my favourite literary witchy villains, not only because she’s a spide type being but because she demonstrates the ability to create life and makes other copies of people. I have a confession I have listened to the audiobook of Coraline at least once a month this year. I honestly don’t know how this wonderfully wicked tale has its claws that deep into me. There are still times where I feel the hair on the back of my neck stand up. It’s a trifecta win for me I love the book, movie and audiobook despite some little differences.