When I learned that Sea Witch was a retelling of the little mermaid I needed to sneak a peek but then finding out the story was told from “Ursula’s” point of view I knew I had to read this book. 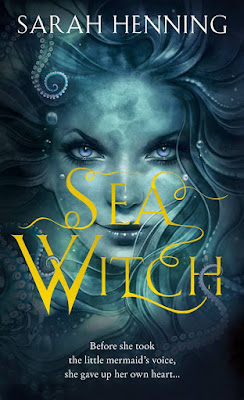 Sarah Henning transforms Hans Christian Andersen’s “The Little Mermaid” into a richly layered exploration of culture and relationships to create the origin story of the Sea Witch.

This book's world is an alternate 19th-century Denmark, in a tiny kingdom composed of a single fishing village. The book is extremely detailed about the Danish seaside traditions that lend seriousness to a novel engrained in the sea and its unpredictable nature. Throughout the book, there is a foreshadowing of the dangers of crossing class boundaries and the burning of witches that suggest dark and unexpected twists. The book cleverly explores magic and its uses with richly woven threads of fairy tale allusions and a surprising ending.

The character and world building were good but if I’m honest all the backstabbing made me read faster and made the story that more real so to speak (I’m sorry I love a bit of fiction drama) and I would have liked a little more conflict to progress the story. The story focus is a Sixteen-year-old girl called Evie a fisherman’s daughter and a secret witch.  Evie is a black-haired, half-Italian girl among the mostly blond Danes, a poor girl with two best friends above her class.  Anna and Nik.  Nik is a prince and really shouldn’t be playing with Evie, but his father made an exception. After the death of their mutual best friend, Anna, Evie and the crown prince, Nik, forge a friendship, which is tested daily by the public judgment as well as their private pain from the loss of their friend.

While out on a boat celebrating Nik’s birthday, there is a storm and Nik goes overboard.  Evie finds him washed up on the shore with a girl singing to him.  She sees Evie and leaves, but not before Evie sees her tail.  Mermaids were supposed to be myths. The girl appears later but with two legs.  This girl looks exactly like Anna but says her name is Annemette.

Annemette has powerful magic and admits to Evie that she’s a mermaid, but not her lost friend, Anna.   Throughout the story, we get chapters from the past.  They start with the accident and then the story continues to now.   These are the parts that we learn more about what happened to Anna and also how Annemette came to land.

This story did have the mermaid and magic, but it really focused on friendship, love, and revenge.  Throughout the entire book, I knew things wouldn’t have a happy ending, but it didn’t stop me from hoping while the story unfolded. I did find I couldn’t help myself from second guessing what was going to happen. With origin stories, my heart always sticks with the villain throughout. We see the beauty of their heart and what tears it into a million pieces. I just didn’t want to believe that sweet, little innocent Evie turned into something so dark.