This Mortal Coil by Emily Suvada 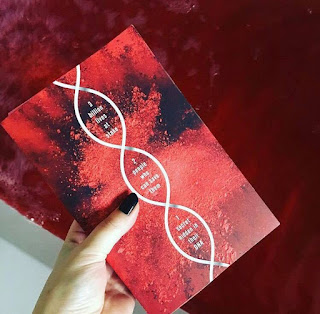 I have to say that I loved this book and spoiler alert this is the first zombie book that has actually made me gag a little. I think this might be down to a weak constitution, I was the same with The Girl with all the Gifts saying fungal infection it just makes me cringe a little. This is a back-date review as I was lucky enough to get an ARC of this book last year at YALC. I am using my photos from when I first read the book as I have lent my finished copy to a friend. This book is also the first in a trilogy. I decided to reread This Mortal Coil as the second book This Cruel Design has been announced to be released in November.

I loved the post-apocalyptic dystopian world that Emily created, it's a brilliant new take on a well-done genre that has gained popularity thanks to shows like Izombie and the Santa Clarita Diet (I love both).   This is a gripping story that is hard to put down until you reach the climactic end. This book is written beautifully even though I’m not going to pretend to understand the wonderfully complex cyber genetics or the science side of things, I completely enjoyed the premise of this book. The book asks the question In a world where humans have been so enhanced by technology, it is hard to see what is left of the human soul and morality. I have to say the blend of science and fiction was executed so well, it was informative without being overwhelming and wasn't so complex as to distract from the story.

In a world where everyone is embedded with technology at birth that allows them to manipulate their DNA. A life-threatening virus (The Hydra virus) is spreading through the United States, an already broken country with a Government that many do not trust. The virus that causes its victims to combust in a cloud of infectious vapour and infects anyone within a mile radius. The uninfected can cannibalize the infected not long after they have been killed to gain immunity to the infection the only catch is the immunity wears off after a few weeks so you have the keep eating the infected to stay immune. This bring in a moral dilemma and I honestly was asking myself could I step into Cat's shoes and gain a little immunity by eating a little of the infected. When the virus first broke out the top scientists frantically tried to produce a vaccine to save humanity, but it seems a hopeless race against time as the virus mutates into new and stronger strains as people start exploding more quickly and powerfully than ever increasing the infection area and chance of getting infected through trying to gain immunity (Clever virus).

Catarina (Cat) Agatta has spent the last two years fending for herself since her father (Lachlan Agatta) was rounded up by the Cartaxus corporation and taken by force to work in the national laboratories. Lachlan tells Catarina to hide above ground and never let Cartaxus take her. But Catarina's a brilliant geneticist too although she is restricted by her body's inability to run the tech most other people can. Then a super soldier named Cole arrives at Cat’s house with the news that her father has died and that Cole needs Cat’s help to finish creating the vaccine Lachlan started while keeping it a secret from Cartaxus. Cole and Catarina must work together to find, decrypt, and release the vaccine to the masses. On their dangerous adventure to save the world, Cat is forced to question everything she thought she knew about her father, Cartaxus, the virus, and even herself.

Cat is a strong, tech-savvy protagonist, who cares about others and helps the reader hang on to the belief in the goodness of mankind. I really felt she was well explored as a character. She was complex as she understands that scientific and technological advancements are dangerous without proper ethical management, but even her belief system is challenged in a world threatened by such a deadly virus. Perspective plays a huge role in the story's unravelling and Emily's manipulation of the world through Cat's eyes was spectacularly played off. She was able to reflect on herself too, at one point, in an unbiased way and looking back at it, it's wonderfully done.
If you have a geeky side and like an impulsive and conflicted female protagonist you should definitely add it to your reading pile.