Anything You Can Imagine: Peter Jackson and the Making of Middle-earth by Ian Nathan (Author), Andy Serkis (Foreword)

Thank you, Edelweiss+ and Harpercollins for giving me this ebook for free in exchange for a honest review

There are spoilers in this review afraid 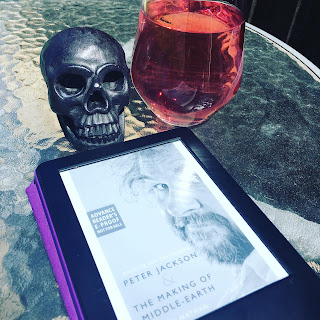 A brilliant and fascinating book by British film writer Ian Nathan, "Anything You Can Imagine: Peter Jackson & the Making of Middle-Earth", tells the behind-the-scenes challenges to get Lord of the Rings (LOTR) and The Hobbit movies made. It also describes how one 25-minute preview of LOTR outside Cannes' main theatre blew the audience away. Anything You Can Imagine takes the reader on a cinematic journey across all six films, featuring interviews with Peter, his cast & crew. From the early days of daring to dream it could be done, through the highs and lows of making the films, to fan adoration and, finally, Oscar glory. With countless and wonderfully insightful first accounts of the filming process and interviews new and old while including all the studio politics and battles to even get the films made at all. The book also looks into the early casting decisions Stuart Townsend as Aragon and Sean Connery as Gandalf.

Ian Nathan reveals how Harvey Weinstein rejected Peter Jackson's original idea for two films - but now, even though Weinstein didn't make LOTR - the films still make him more money than any of his films. The book details Jackson's pre-production battles with Harvey Weinstein before New Line's brave decision to take the project on. Having already "wasted" (in Harvey Weinstein's opinion) US$12m in developing a two-movie script, Jackson felt the full Weinstein wrath. Having “squandered” the money, the Peter had to now make a single two-hour movie or he would be replaced by Shakespeare in Love director John Madden, or someone even more high-profile (Quentin Tarantino).

The streamlined approach of the trilogy would have cut the battle at Helm's Deep, Eowyn would replace Faramir as Boromir's sister, the Balrog would disappear and even Saruman's fate was in the balance. "It was literally guaranteed to disappoint every single person that has read that book," Jackson told Nathan. In my opinion I’m total with Peter telling them to politely shove it, the battle at Helms Deep is honestly one of my favourite moments in the original trilogy and I believe it helps the watchers to suspended their disbelief more than if the scene had completely been cut.

Reading this book not only made me want to re-watch The Lord of the Rings trilogy and The Hobbit trilogy it adds to my excitement for Jackson's "Mortal Engines" set for release December this year. I think this book is worth a read for anyone who would like to know more about Peter Jackson's world or a look into the behind the scenes of the film world.