Review: Part of Your World: A Twisted Tale by Elizabeth Braswell


Hello Readers,
Today we are continuing Disney week by reviewing another book in the twisted tale series. This series looks at what would have happened if they key turning points in Disney films hadn’t of worked out as planned. For example, what if The Queen poisoned the prince? And what if sleeping beauty never woke up? I grew up on Disney and I love what I have read so far. 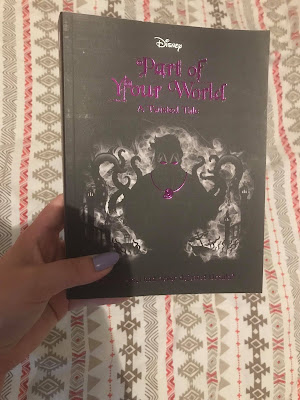 Today we are looking at another Little Mermaid retelling you know how I love them and just can’t help myself (I just checked I’ve reviewed three). This is another one of the twisted tales that I couldn’t wait to read. I loved the little mermaid when I was little as well as the sequel and the tv series (yup that was a thing). I know I raved how Maleficent is the best villain but I think that’s because we both have a major resting bitch face. However, Ursula is a close second, she actually puts a lot of thought into their evil plans and she set the standard for Disney Villains to be different. A little bonus fact Ursula’s design was inspired by a Drag Queen named Divine.

If you haven’t seen The Little Mermaid this next bit might not make any sense also the film came out 29 years ago you don’t get a spoiler warning anymore. You know how the whole wedding between “Vanessa” and Prince Eric well in this tale it goes off without a hitch which means Ursula’s nautilus shell necklace never breaks, freeing Ariel’s voice, and since she cannot sing, Eric remains entranced by Vanessa. Ariel is turned back into a mermaid only because King Triton sacrifices himself, and now Ursula rules the human kingdom as a cruel princess. Ariel returns, mute, to Atlantica to rule, believing her father to be dead. For the first part of the book, Ariel has no voice and communicates with her friends with a form of sign language.

This book is set five years after Ursula has won. One day Scuttle and his great-granddaughter are watching a play that Eric wrote, one that had a very familiar story with a somewhat different ending and Scuttle discovers that King Triton is still alive…in his polyp form. Ariel returns to the surface in hopes of finding her father and restoring him to the throne. Nothing goes to plan, as Ariel attempts to put an end to Ursula’s evil plans. Ariel needs help and naturally, that help comes in many familiar faces.

The characters are fleshed out with more background, showing how their experiences have shaped them and it is done beautifully. This Ariel is much more thoughtful and much less impulsive than the one we know because of all of the responsibility that has been thrust upon her.  Ariel finally reflects upon the decisions she made 5 years ago and how her choices affected all those around her, proving that she has matured far beyond her 21 years of age. I think that was everyone’s complaint with the movie as they grew older and had a better understanding of the plot. Eric, on the other hand, has slowly begun to deteriorate over the years, being under Ursula’s spell for so long has caused him to become disconnected with his surroundings. Throughout the course of the book, he has to fight to regain his sensibility and rationality, his evolution is interesting to watch.

the story was told from mainly from Ariel and Eric’s point of view and Ursula’s occasionally. It was interesting getting all the different perspectives and made the ease of story-telling that much clearer.
Even though the plot is a basic good versus evil, it was still entertaining and held my attention until the very end. The additions that were done to make this tale much more developed and help it evolve make the tale interesting and I can’t recommend it enough.
L x

Twisted Tales Reviews
Mirror, Mirror
Once Upon a Dream
A whole New World