Shock PERIODS are a thing

Today's post is YALC inspired but not in the way you think. This year at YALC the brilliant charity Bloody Good Period had a stall and was accepting donations. After being lucky enough to talk to the founder Gabby Edlin on Friday and it honestly got my brain ticking into overdrive about period poverty.

The first part of this blog is solely dedicated to Bloody Good Period, the second half will focus on period poverty.  I have tried to donate menstrual products at a woman’s shelter near where I live and was told they weren’t accepted.

MENSTRUAL PRODUCTS ARE NOT A LUXURY OR USED ONLY AN EMERGENCY!

Gabby was volunteering at a drop-in centre for asylum seekers and refugees in north London in October 2016, she learnt that sanitary products were classed as ‘emergency’ items and weren’t widely available to women visiting the centre. If you have ever come on your period without realising it was that time you know it’s an emergency, it is honestly the worst feeling and your brain goes into overdrive. Have I leaked on my jeans? Do I need to buy new underwear?  I am by myself I can't get anyone to check if you can see it on my jeans? Can I sneakily check in the mirror without anyone noticing? 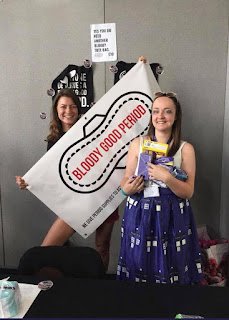 Only a few food banks and asylum seeker drop-in centres were providing feminine hygiene products - despite a desperate need. Gabby decided that periods should no longer be an afterthought and asked friends on Facebook to donate sanitary products for her to take to the centre.

Bloody Good aims to create a sustainable amount of sanitary protection for the women visiting food banks and centres in the UK. Bloody Good started out in the New North London Synagogue (NNLS) and the New London Synagogue (NLS) Asylum Seeker Drop-Ins, and now they supply 15 asylum seeker drop-in centres based in London and Leeds.

This is the first charitable project in the period poverty movement to focus on the needs of refugee and asylum-seeking women, whilst changing the way people talk about menstruation.

Menstrual supplies are not cheap, but for anyone with a period, but they are an absolute necessity. It is absurd that they are not free for those who need them., especially people who are not entitled to earn a living.  Many women living in poverty must resort to using toilet paper, old scraps of fabric or nothing at all.

What started as a whip-round on Facebook is now a growing enterprise with a vision to end period poverty. 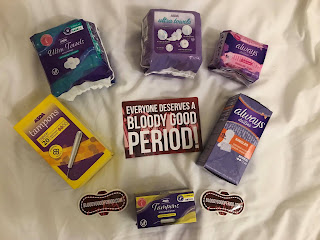 A report by the charity Plan International UK of  a study of 1000 girls, 49% of girls missed a whole day of school because of having their period. With 68% admitting they couldn’t fully concentrate in class with the worry of not having access to the toilet or suitable sanitary wear. The survey also found that 14% of girls have had to borrow menstrual products from a friend and 12% have had to improvise with items such as socks, newspapers, or toilet roll. Out of the 49% of girls that have missed at least one full day of school due to their period 68% said they were unable to pay attention in class.

Over half of the girls said they were embarrassed and afraid of the stigma of asking for help. This means there is still a taboo talking about menstruation. Girls keep silent about their periods for different reasons. The survey found 59% of girls would rather make up an excuse than to admit they are on their period. At the beach, someone might avoid swimming because they “feel sick,” or they need to go to the bathroom to “reapply their makeup.” I remember being at school and being mortified getting told off for trying to take my pencil case with me to the toilet – my genius not obvious plan backfired.

I googled terms for periods and this was the first suggestion

Let’s take a look at the facts
N  1 in 10 girls aged 14 to 21 can’t afford menstrual products
N  Half of all schoolgirls miss a full day of school because of their period
N  68,000 women in the UK are currently homeless
N  Schoolgirls in Leeds were using socks instead of sanitary towels
N  Labour MPs have pledged to set aside £10 million to end period poverty
N  Scotland was the first country in the world to give free tampons to low-income families
N  Lack of menstrual hygiene can lead to very serious health risks such as Toxic Shock Syndrome, a life-threatening illness.
N  Many girls from low-income families are skipping school because they cannot afford tampons or pads.
N  The stigma surrounding periods has been shown to directly affect a girl’s potential to succeed If a girl misses school every time she has her period.