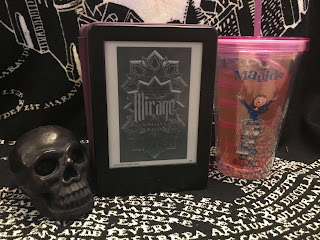 Mirage is Somaiya Daud’s debut novel, the book is a gripping tale of lies, cruelty, political conspiracies, colonialism and rebellion. The book is set in a fabulously detailed world with plenty of cultural detail that is Moroccan inspired, I honestly loved reading the Moroccan inspired traditions and familial heritage. The beautiful poetry, and the way Somaiya seamlessly fuses science fiction and fantasy together at times it felt a little more like a fantasy novel, with a timeless quality to the setting, just as you let fall into the fantasy bubble then a Droid comes along to remind everyone it is sci-fi after all. The way the traditions, heritage and sci-fi elements are beautifully intertwined is a magnificent unique twist! Unlike anything have read before.

On a serious note, cultural destruction is a very prominent theme throughout this book. Mirage follows Amani, a young girl growing up in a poverty-stricken village on a planet called Cadiz, the daughter planet of Andala.  The day of Amani’s Majority Night, a spiritual blessing into the life of adulthood, she is kidnapped by imperial droids and taken to the palace of King Mathis to serve as the body double for Princess Maram.  Amani is forced to shed her old identity and receives rigorous lessons on Princess Maram’s personality and mannerisms.  Amani is in way over her head she is living under constant threat of assassination, the physical and emotional abuse from the Royals, along with studying the Vathek, history, ancestry, and customs. However, despite the horrors of this new life, Amani finds comfort in poetry and Idris, Princess Maram’s fiancé. She risks her life every day for a brutal princess and is forced to fool all of the Vathek royalty into thinking that she is in fact Maram.

There is a whole cast of gorgeous characters, I’m going to focus on Maram and Amani.

Maram
When we first meet Maram, she is undeniably cruel. But then as the story progresses, we start to see a different side to her. A sad and lonely woman, broken and moulded by what people have done to her, starts to emerge. Maram is much, much more complicated, and far darker character, especially at first, Maram is so hated that her life is in jeopardy every time she makes public appearances, therefore Amani takes Maram place during functions. I loved the character development between her and Amani is beautiful and timid. Maram is torn between what her father wants her to be, and what her dead mother wished her to be.

Amani
Amani is a likeable character who sees the good in the other characters despite their cultural and political differences. Amani has a rough time, but I admired the way she handled the changes.  She is genuinely a good protagonist and narrator for the story. She’s not rash or foolish or recklessly brave for no reason. She’s smart and compassionate, but she’s not entirely perfect either. She understands her situation in the palace and does not unnecessarily risk her life to do something stupidly heroic.

Mirage is an intriguing book the collapse of right and wrong progresses further as the story continues. We find we don’t know whose side we’re on anymore, or what the precise cost of peace is. The book moves slowly building the flame of rebellion and tension perfectly.  Somaiya enhances the story every so often by adding poetry into very heartfelt moments, encouraged by beautiful prose. I love the strong female characters, love, hope, sci-fi (I wasn’t expecting so many Sci-Fi elements but it was such a pleasant surprise), fantasy and explores another culture so wonderfully. This book was all-in-all a beautiful debut and I can’t wait to read the next in the series!