The Dark Descent of Elizabeth Frankenstein by Kiersten White


I was lucky enough to get a copy of this book for free from Stephanie Perkins back in May through an Instagram competition and I have been dying to share my review. I’ve been good and left it to the month the book is released (September 25).  Trigger warnings, Descriptive animal cruelty, murder, body parts, mutilation, physical and emotional abuse. Also this isn't as spoiler free as I would have liked but I really enjoyed this book and had to sing its praises. 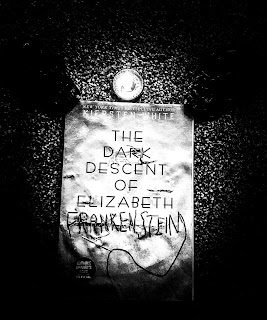 The Dark Descent of Elizabeth Frankenstein is a retelling of Mary Shelley's Frankenstein (The Modern Prometheus for you fellow literary nerds), which just happens to be celebrating its two-hundred-year release this year. It is promisingly creepy and twisted, and I loved every part of it. This book has a dark atmosphere that is oppressive, rain, and muted colours making the tale marvellously dark. Little rant coming not specific to this book but I’ve seen some recent post how a dark book with an obviously darkish title wasn’t all fuzzy kittens and rainbows. THE HINT IS IN THE TITLE!

In this retelling of Mary Shelley’s Frankenstein instead of following Victor Frankenstein himself, we follow the story through the eyes of Elizabeth, the girl who grew up alongside him. I loved that the perspective has changed and was told from a strong female protagonist perspective. Elizabeth Lavenza wants to escape her abusive guardian and soon finds herself at the age of five, in the care of the Frankenstein’s. The Frankenstein’s  take Elizabeth home in the hope of finding a lifelong friend for their son Victor.  Victor gets angry and lashes out it's soon clear that Elizabeth is the only one who can calm him, Elizabeth's current life situation has been dependant on her ability to keep Victor happy. As Victor and Elizabeth grow up, they end up bringing Justine into the group after Elizabeth rescues her from an abusive mother, and later Henry, whose parents have become friends with Frankenstein’s.

After Victor leaves for school, his letters to Elizabeth soon stop; Henry goes to investigate whether Victor is alive and well. When Henry does not contact Elizabeth and is presumed missing similar to Victor, Elizabeth and Justine take the situation into their own hands and set out to investigate what has happened to their friends. As the story unravels, the horrors Victor has been carrying out begin to come to light and could be more terrifying than Elizabeth could have ever imagined. The Dark Descent asks the same question asked in the original Frankenstein story. Who is really the monster? The monster that was created or the man who created him? Characters do not have to be likeable or appealing to be interesting, but then in this tale, they are not meant to be nice and fluffy. I sometimes find as I did in this story the less likeable the character, the more interesting they are and they become crucial to the story.

I immediately fell in love with Elizabeth, the main character. She was immoral, goal-oriented and did everything in her power to get what she wanted. Elizabeth may seem a little selfish to the reader, by trying to manipulate things just remember that in the books time period there was very little a woman of her status could truly control unless she slightly manipulated the situation. The historical bits are mostly accurate, though perhaps Elizabeth does get a bit of leeway in places when she goes out on her own. The moral indecision of Elizabeth becomes more evident during the progression of the book as her sense of self-preservation is so strong and she is not above using the means of a gentler nature to reach her goals.

Kiersten's writing is so atmospheric and close to the original source material without it being a direct copy. I found myself engrossed in the backstories, and the central mystery, while also feeling as though I was standing inside the world of the book.

A great read for October and you must read this book since it's the 200th Anniversary of Frankenstein in 2018!!