The Vampire Chronicles by Anne Rice

I picked The Vampire Chronicles for vampire week as I think  Lestat would love a whole blog post about him.

The Vampire Chronicles series contains 12 books two of which have been made into films and there are rumours of a tv series. 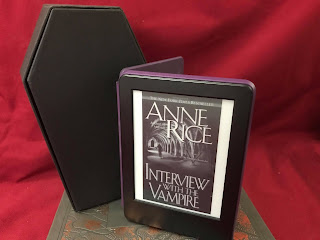 The series of books revolves around the fictional character Lestat de Lioncourt and his pre-vampire days in eighteenth-century rural France to his vampire life in nineteenth-century New Orleans to his adventures in the United States during the twentieth century. Lestat wants to know how vampires were created, mourns the loss of his mortal life, and explores the existence of good and evil.

Anne Rice’s vampires are created by being drained of blood to the point of death, then allowed to save themselves by drinking, in turn, the blood of the vampire who made them. They did not fear garlic, crucifixes, holy water, or silver and wooden stakes are only a danger if the sun comes up while they were struggling to get free.

Lestat embodies an aristocratic vampire in 18th century Paris. A bold, enthusiastic and defiant being, who delights in his own arrogance and conceited attitude, Lestat carries himself with the aura of richness and entitlement. Lestat stands at six feet, with thick rather curly blonde hair, green eyes a nose is fairly short and narrow, while his mouth is well shaped and his skin deathly white. Lestat’s egotistic qualities and concerns with fashion are shown through the series he will pause mid-narrative merely to remind the reader what he is wearing. However, underneath this façade, he is a tortured soul scarred by the turmoil and betrayal of his past.