Tim Burton's The Nightmare Before Christmas by Tim Burton


Happy Christmas Readers,
Today we're going to look at my favourite film and a random fact we share a birth and both turned 25 this year. Before we start, we will not be having the Halloween movie, Christmas movie or the in-between movie argument I watch this film all year round and yes that does mean I have sung This is Halloween in a summer dress in July.

I love the film, I love Tim Burton, I love Danny Elfman (UK tour next year) this post is completely biased. 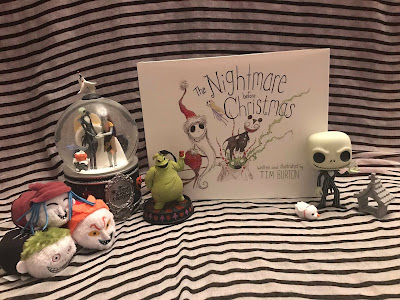 Tim captures the reader's attention from the very first page, especially as we meet Jack Skellington and hear of his ghoulish antics.  Random internet fact so don’t hold it against me if it’s wrong; the poem predates the film by eleven years, it is difficult not to view the book as a companion as the film has surpassed its predecessor.

This book is not a direct adaptation of the movie. Instead, this is the original poem Tim Burton had written and proposed to the Studios when he worked as a Disney Animator. The story is stripped down to its bare bones, with no Sally (she’s in the background on one page) or Dr Finkelstein and no Oogie Boogie. There are none of the other main characters besides Jack Skellington, Zero, and Santa.

This short picture book is beyond cute, it's a fun read and I love that it takes this familiar tale in a new light, and I love Tim’s original drawings; the man is a freaking genius. The book is beautifully designed you keep finding details each time you reread it. I particularly adore the two-paged painting where Jack is Santa in his sleigh being pulled by the reindeer, and the last page.

The movie begins with the narrator informing the audience that each holiday has its own town (yes I know the opening by heart and another side note if you find the original soundtrack the narrator is Sir Patrick Stewart). Each town has its own job for example Halloween Town, is in charge of all the preparations for Halloween, and its most prominent citizen is the Pumpkin King himself Jack Skellington. (Hey Tim buddy if you see this can we explore the other towns please or a second film I’m not picky either one I’m good)

Jack Skellington, the Pumpkin King of dreary but wonderful Halloween Town, who finds a secret passageway to Christmas Town. Enchanted by the colours and high spirits, Jack decides to kidnapped Santa and play the role of Jolly Old St. Nick, while his helpers from Halloween Town manufacture presents which goes as well as you can imagine who doesn’t love a shrunken head and a toy snake that devours Christmas trees.

If its not something you've seen yet try it once now is "apparently" the right time of year. either way I would recommend the book or film to anyone both are wonderful in their own unique way.