The Colour of Magic by Sir Terry Pratchett

I am continuing Terry Pratchett week with the book that started it all The Colour of Magic. This year for my birthday I asked for Reaper Man, The Colour of Magic, The Hogfather, The Fifth Elephant and Going postal in the new covers by Gollancz and Doubleday they are stunning. This is the third book that has been adapted for the tv. 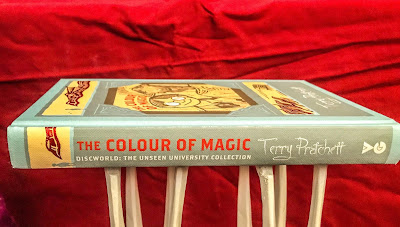 The colour of magic is filled with ambitious wizards and ruthless assassins, set in the city of Ankh-Morpork which has survived many dangers in the past, but now it must face a more dangerous, shocking and destructive force...TOURISM!!! The story follows two main characters, Rincewind and Twoflower. Rincewind is a cowardly fake wizard who happens to carry the most powerful spell in the Discworld in his mind and is tasked with protecting Twoflower by the ruler of Ankh-Morpork, a naive but rich insurance agent touring the Discworld, who has more luck in one day than anyone should rightfully have their whole lives. Joining the travellers is one of my favourite inanimate objects in the Discworld a multi-legged, man-eating, overprotective chest of luggage. It follows Rincewind across the Disc and protects him from any threat. It also has the uncanny ability to convey emotions (mostly menace) without possessing any facial features.

Rincewind was expelled from the wizard’s university. However, after reading a restricted book he accidentally manages to learn an extremely powerful spell.  Unfortunately, the spell leaves Rincewind without any magic! Oh and Rincewind is being plagued by DEATH who makes it his goal to kill the unfortunate wizard. So, a nice normal day on the Discworld. I love Rincewind and I love the shard of the Great magical spell lodged in his brain, Death's endless chase for him, the straight adventure he finds himself in.

Twoflower, is a naive tourist with an impossibly optimistic attitude, oodles of gold, and an indestructible, vicious and relentless treasure chest on legs to defend him. Twoflower is an insurance seller from the Agatean Empire (which is on the opposite side of the Discworld from Ankh- Morpork) who decides that he wants to travel and see the Discworld. Twoflower decides to explore Ankh- Morpork in search of adventure. Twoflower's well-meaning but careless ways earn him the attention of pirates, Dragonriders, and various supernatural entities, all looking to rid Twoflower of his treasure...not to mention his life! Twoflower is the first ever tourist to Ankh-Morpork and the ruler of the city has to keep him safe, otherwise, he’ll feel the wrath of the Agatean Empire. Twoflower is tremendous, too, and the chest is one of the greatest unsung heroes of the age.

The world, plot and characters are well written. I love Terry’s ability to make fun of corruption, greed, cowardice, and other evils so common in the world without coming off as bitter or even very critical and his ability to create characters with many faults but makes them lovable anyway. Terry also had a great sense of comedic timing and the book kept me entertained from start to finish. Definitely, recommend a read of this. In addition, the novel is left on a great cliff-hanger making me want to read the next novel in the series.