Hello Readers,
Thank you, Sarah and Titan Books, for sending me a copy of Godzilla King of Monsters Movie Novelisation by Greg Keyes for free in exchange for an honest review. 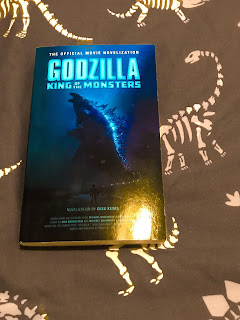 I love Godzilla, I remember going to the cinema going to see it in 1998 (the one with Matthew Broderick and Jean Reno) and being so excited as this was the first “grown-up” film I had gone to see and wasn’t scared. I also had the really cool holographic Godzilla sunglasses. Luckily, I have enjoyed the newer remakes as well. I honestly love the concept of having Godzilla being used as the protector of the human race against other giant cryptids. So, this review may be a little bias but who’s going to argue with a 350-foot lizard cause I ain't.

Just to clear up some comments in reviews I've seen yes If you've seen the movie, then you will know most of the story. It’s the official movie novelisation it’s a companion, not a retelling or different story. This book expands upon the film by adding new scenes and a better understanding of what happened. Perhaps the best of these are glimpses into the thoughts of the characters and gives a peek into past events that led up to that point of the story. I will be honest this book filled in some of the gaps and answered some question I had after watching the film.

I found this book actually refined some of the details in the film for me for example what character was where at any given moment. During the film there were bits I were I wasn’t always sure if the characters were in the submarine, Argo or a base somewhere it might have been that my head wasn’t in the right place but this book really helped me. Also, the events surrounding ORCA made a lot more sense in the book, since I think the extras scenes were cut from the film. This book will also help you to understand some of the more confusing moments. For example, the "Monsterverse" and its various elements and people and geographies and gives a few extra details to develop our knowledge on the "lesser" Titans.  If you didn't catch the names of the other monsters in the film, this book will give you their names and a better description. The quotes that show the history of Titans were kind of fun and helped to flesh out the world that had been created. There are some little Easter eggs or special touches that are included that are a nod to the older films which I think is brilliant. There were a couple of scenes that I now have a different take on and some characters I understand better.

I do have one little hiccup with the movie and that is here are chunks of the movie where you have to have a bit of faith that it makes sense, while the book does a much better job of putting the puzzle together and making it feel much more complete and polished. Saying that I can't wait to see Godzilla vs. Kong in 2020 this movie will be a sequel to Godzilla: King of the Monsters and Kong: Skull Island, and will be the fourth film in the Monsterverse.

This book does what any good novelisations is supposed to do… it fills in the gaps and compliments the original source. I would recommend this book to anyone who has seen the film and got a little confused or to any Monsterverse fans.

One thing to remember all the other the monsters have come and gone, the only one remaining is Godzilla. Long live The King!