Thank you, Julia and Titan Books, for sending me a copy of MIB Movie Novelisation by R. S. Belcher for free in exchange for an honest review.
Spoiler-free 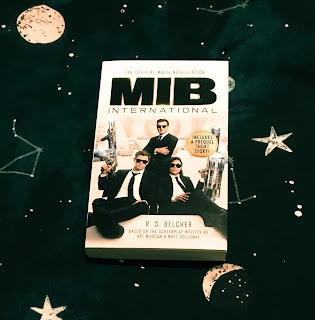 This was another book I jumped at the chance to review just for the nostalgic feels. I was four when the first Men in Black movie came out so I think I saw this for the first time around the 2000 and I loved it, it was my bedtime movie for aged (Thank for the input Mother Goose). I know the second and third film aren’t as popular as the first but anything that wants to develop the MIB universe is worth taking a chance on in my opinion.

I will have my little running rant with retelling's and movie novelisations and then we will jump straight in. Remember that this is the official movie novelisation it’s a companion, not a retelling or different story. This book expands upon the film and gives us a better understanding of what happened during the film. Perhaps the best of these are glimpses into the thoughts of the characters, we also get the added bonus of learning more about Agent H (Chris Hemsworth’s character) through a prequel short story.

The Men in Black protect us against extra-terrestrial violence and have always protected the Earth from the worst scum of the universe (yes, I am going to see how many of the song lyrics I can put into this post). In this new adventure, they tackle their biggest, most global threat to date: a mole in the Men in Black organisation. (No spoilers) Like come on you have one of the best jobs in the world and you’re going to throw it all way. Also, just a reminder the good guys dress in black and they are our first, last and only line of defence, Against the extra-terrestrial violence. Forget Roswell the MIB know what they’re doing. This book does what any respectable move novelisations is supposed to do… it develops and complements the original source.

Quick film round up and then well be onto the book MIB: International is set within the universe of the previous three Men in Black films.  The film features a star-studded cast including Chris Hemsworth, Tessa Thompson, Emma Thompson and Liam Neeson. They really went all out in developing the story and bring in a wonderfully talented cast.

Men in Black: International has added some modern tweaks to the franchise's premise, but puts more focus on the comedic chemistry of its leads that’s translated through the pages of the book beautifully.  Thankfully the book doesn't waste viewers' time reintroducing the entire world of Men in Black, to its readers, instead, it builds upon what came before.

Men in Black: International introduces some interesting ideas about the organization's role in brokering peace between Earth and numerous alien races, Protecting key alien artefacts and The Men in Black's role in the universe. There are enough new ideas in International to set it apart from previous films in the franchise, in my opinion, it’s the leading duo that is important to the film's success.

I honestly really enjoyed this book, all I have left to say Here come the Men In Black, Galaxy defenders.