Today is the start of Disney week!!! This week I will be reviewing the twisted tale series. This series looks at what would have happened if they key turning points in Disney films hadn’t of worked out as planned. For example, what if The Queen poisoned the prince? And what if sleeping beauty never woke up? I grew up on Disney and I love what I have read so far. 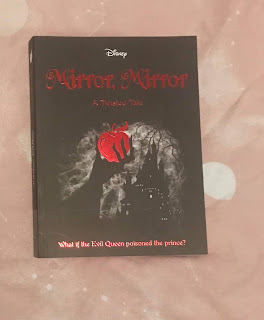 I will be honest I wasn’t sure if I was going to like Mirror, Mirror. Snow White for me is one of those things that has just been done waaaaay to many times to make it enjoyable anymore off the top of my head I can think of at least six other re-works. however, I was pleasantly surprised and actually enjoyed this retelling. This tale is told in alternating third-person perspectives, one being Snow White's, and the other being Ingrid's

In this retelling we not only get to see a Snow White turned into a fighting princess, who wants to right the wrongs of her people but of her family, I know Snow White turning into a fighting princess isn’t new (Snow White and The Huntsman and Mirror Mirror) but with this tale We get to learn about The Evil Queen and why she became so, well, evil and where she acquired her infamous magic mirror I really enjoyed learning how she became “Evil”.

We get a deeper understanding of these characters who we only know so much about in the original film as well as some new characters, and some tropes get switched around. This gives you a small glimpse into the lives of Snow's mother and aunt before Katherine ever became queen and gave birth to the most well-known princess in existence. We also discover a little more about Snow’s childhood and how she is related to The Evil Queen, her Aunt Ingrid. I did find the Queen's transformation from one who protects her sister from their abuser to utterly ruthless despot a little bit too fast but the mirror did explain it all.

We get an explanation of Snow White’s passive characteristics by them being interpreted as subversive acts of survival and finding her own choice and giving herself a routine as a way to survive growing up imprisoned. We also learn about Snow White’s bird connection and singing is a homage to her mother, who was known as an excellent agriculturist, effective and engaged queen.
I have seen some complaints that so many scenes were just a play by play of the movie with certain scenes, yes, they can be but usually, this is to develop the already existing story not just for the sake of it. It’s a retelling what do you expect there needs to be development on what has already happened its kind of the point. I didn't feel like anything was forced too much, like most retellings it wanted to be different but also stay true to the original story.

Most of the story is how you would remember from the Disney movie. Queen is evil, Snow meets a boy, Queen tries to have Snow killed because she's prettier than the queen, Huntsman can't do it, Snow runs away and meets the dwarfs. This retelling is different as it shows you the past. I do have a little hiccup and that is I wish I got to see more of the dwarves ' personalities beyond their stock traits, but the modifying of the prince from being simply handsome and charming to a true ally with interests in common with Snow was refreshing.

The other important changes and additions that were done to make this tale much richer and a lot more interesting and I can’t recommend it enough.