Hello Readers,
Today we are continuing Disney week by reviewing another book in the twisted tale series. This series looks at what would have happened if they key turning points in Disney films hadn’t of worked out as planned. For example, what if The Queen poisoned the prince? And what if sleeping beauty never woke up? I grew up on Disney and I love what I have read so far. 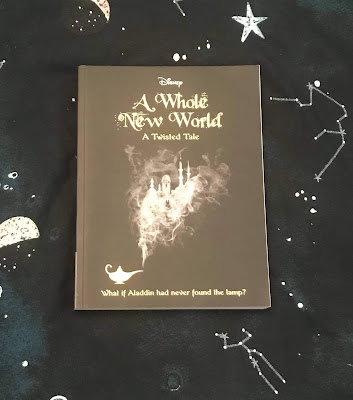 Out of all the twisted tales, this was the one I was most anxious about I’ve always loved Aladdin and got a little more protective over it since Robin died, I honestly haven’t seen the new film yet. One thing I did see before I brought the book were some negative reviews about how it is almost a replay of the movie. I know I addressed this in the Mirror, Mirror review but here we go, this was the first twisted tale book. Also, the scenes that are similar are used to develop the already existing story not just for the sake of it. It’s the first twisted tale retelling what do you expect there needs to be developed on what has already happened it’s kind of the point. I didn't feel like anything was forced too much, like most retellings it wanted to be different but also stay true to the original story.

The story was slow to start, but once the danger and excitement picked up, the pace stayed fast for the rest of the book and I had trouble putting it down. Jafar steals the Genie's lamp, he uses his first two wishes to become sultan and the most powerful sorcerer in the world. Agrabah lives in fear, waiting for his third and final wish.  Although dark in some places which I believe were much intended to be so otherwise it would have been the happy ever after that we all remember with the movie. This book does contain some pretty graphic scenes of violence and murder, particularly the ways in which Jafar murders his adversaries using dark magic.

Liz did a fantastic job spinning this classic story into a total what if situation that could have totally been the way the story went. To stop the power-mad ruler, Aladdin and the deposed princess Jasmine must unite the people of Agrabah in rebellion. But soon their fight for freedom threatens to tear the kingdom apart in a costly civil war. Agrabah very clearly split into two sides in this book: the well-to-do side, and the poor side. It was both a vibrant desert city and a shadowy ruin, depending on your social status. The darker undertone adds to the intensity and the need for the revolution to be successful.

The best part of this book by far is how bad-ass Jasmine has become and how she is the true feminist warrior we wanted in the Disney movie. Jasmine was a fairly strong princess in the original Disney movie don’t get me wrong, but Liz makes her into so much more. Jasmine doesn't just run away and moan about her life; she challenges what is wrong and right, and becomes the true enemy of Jafar. From the very beginning, her desire for freedom burns, and she is able to seriously sympathise with the poor.

One thing that is majorly different from the film is we get to learn more about Aladdin, Genie and even Jafar, and their lives before the event of the story. We find out that Aladdin's father left to go find a better life and never came back, and that sets the story for why he is on the streets. All of our favourite characters are here too including Rajah, Carpet and Abu. Liz make these characters more believable, then their animated counterparts and does a fantastic job at it.

I really don't understand how this book is getting such a negative response it’s a retelling. I loved it so much, I enjoyed Aladdin's and Jasmine's new adventure and I can’t recommend it enough.