Review: Once Upon a Dream: A Twisted Tale by Elizabeth J. Braswell

Today we are continuing Disney week by reviewing another book in the twisted tale series. This series looks at what would have happened if they key turning points in Disney films hadn’t of worked out as planned. For example, what if The Queen poisoned the prince? And what if sleeping beauty never woke up? I grew up on Disney and I love what I have read so far. 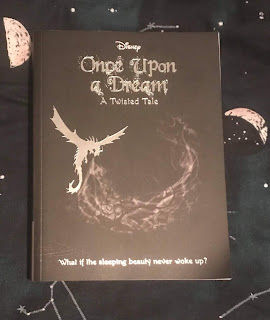 Once Upon a Dream was a lot darker than I thought it would be. What starts off as a somewhat confusing alternative story, soon turned into a dark and almost troubling plot which bring so much more to the original story. I thought it was going to be pretty light-hearted, but it wasn't at times it was dark and sometimes it got a little ugly which gives the book the feel of the original tale.

As with my review of Mirror, Mirror I loved how the retelling of the Disney story had all the characters as develop and gain a lot more personality. I have one tiny little niggling feeling and it’s that some of the themes become a little too much don’t get me wrong I’m all for girl power, but it’s a little bit too much when it’s spelt out, for example, a character as graceful as Aurora dons a suit of armour and wields a sword after her strength is shown both mentally and physically just a little much.

I slightly prefer the Aurora in this story compared to the Disney movie as once she escapes from the castle, she decides to escape the dream and that in turn will save her kingdom. Aurora is more than "just" graceful and beautiful and blessed with a beautiful voice. She is intelligent, compassionate, brave and takes part in her own rescue and chooses her own happy ending. Liz did try to show an in-depth look at Aurora and her journey from princess to queen and all the new characteristics and responsibilities that come with that. I also loved the new approach of not having Aurora be in love with Phillip as soon as she meets him in the dream world, it was brilliant.

I thought the characters were good as they each had their little moments. Philip and Aurora still felt like themselves, but then more developed. This retelling actually gives them time to actually know each other, to see each other's ugly side and consequently gives them the chance to really choose each other, instead of it being true love at first sight. I really liked how Maleficent was depicted in this book she was more fleshed out and given a what could have been and ads a little humanity to one of the biggest villains in Disney history. Maleficent, has always been a remarkable villain sorry even with the remakes with Angelina Jolie trying to make her “Nice”.

The Development and additions that were done to make this tale more interesting were magnificent and I can’t recommend it enough.
L x