Pan's Labyrinth: The Labyrinth of the Faun by Cornelia Funke and Guillermo del Toro


Thank you, NetGalley and Bloomsbury Publishing for the chance to read Pan's Labyrinth: The Labyrinth of the Faun by Cornelia Funke and Guillermo del Toro on ebook for free in exchange for an honest review

If you follow my Instagram or twitter you know how excited I was to get approved for this book from NetGalley. I had been pining over it for a while I loved the film and the cover reveal. 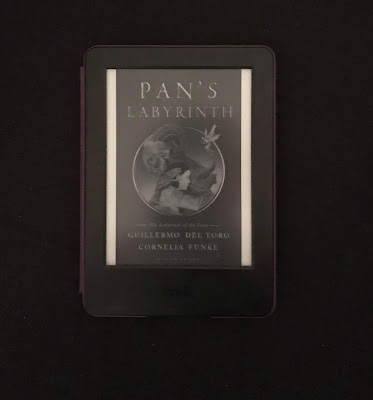 I will again have my little running rant with retelling's and movie novelisations for any new people and then we will jump straight in. Remember that this book based on Guillermo del Toro’s critically acclaimed movie, not a retelling or different story. This book expands upon the film and gives us a better understanding of what happened during the film. It’s a faithful adaptation of the film, with beautiful imagery that adds to the fantasy.

I will be honest because I have seen the film (waaay too many times), my brain was a little lazy despite the wonderfully dark and rich descriptions, I had some of the creepy imagery in my head particularly of The Pale Man and the Faun. Reading this bought back the movie in much of its original glory, haunting, tragic, painful, the magical realism, the darkest of fairy tales, immersing us the reader in all its vibrant intensity.

I’m a huge fan of adult fantasy books with a child protagonist there is something that makes the story darker and it adds more of an uncomfortable edge to the story and completely changes the tone. I particularly liked how the book split itself between the folklore-style stories of how the underworld influenced ancient times and the historical fiction narrative of civil war-ravaged Spain. There is the young girl, Ofelia, living in the brutality and terrors of the fascist Franco's regime. Ofelia desperately longs for and dreams of a world free of the everyday nightmares of her life.

You get the sense of a fairytale coming to life with this, of course, Ofelia is the princess. How could she not be? Vidal is every inch the Wolf, hunting his prey through the pages.  Ofelia and her Mother arrive at a once-abandoned mill steeped in fairy tale history, Ophelia stumbles upon a labyrinth and soon begins to explore the labyrinth in the gardens where she meets an ancient and sinister faun, who claims she is the long lost Princess of his underground kingdom. The labyrinth is so much darker in its myths and magic, reflecting the realities of life, of a war-torn nation and fascism. The Faun sets Ophelia three dangerous tasks, which she must complete while avoiding the guerrilla warfare of the forest. Despite being set the three tasks Ofelia is so grateful to be given this escape from her miserable life at the mill, however, she doesn’t allow herself to get completely swept away.
Ofelia is our protagonist and I adored her, she's the ultimate embodiment of both the innocence and the fierce intelligence that children can possess, and she’s probably the most interesting younger protagonist that I’ve come across.

Let me try and explain this Ofelia has that unquestionable belief in magic, fairies and fauns that only children can have, however, She’s intelligent enough to figure out that a dress her mother painstakingly made, isn’t really for or about her, it’s just another way for her mum to try and please her stepfather. Ofelia is beyond wise for her years I think she only 9 I may be wrong she has an understanding of what it is her mum really is doing and saying with her actions, but she just can’t fathom why she would choose to and it’s honestly so heart-breaking.
The Faun is an exceptionally creepy character and I’ll be honest I’m not really sure what his relationship with Ofelia is, and that isn’t really cleared up in this novel. However, I think the mystery is a part of the story.

This novel effortlessly captures so much of vitality of the film, reinforcing just how imaginative and beautiful it is, and the despair of this historical period in Spain, Something I LOVED was the inclusion of the older “fairy-tales”, the myths that build up the world that Ofelia is just now stepping into.  The book does a wonderful job adding depth and clarity to the world and finds a way to subtly connect most of the characters within the magical kingdom in a very clever way, adding a whole other layer of depth to the legend of the labyrinth. I was also impressed with the pacing of these stories, as they never felt unnecessary nor distracting from the main narrative.

If you haven’t seen the film read the book first, then the del Toro magic from the film will be stunning and you can compare the book to the film without any preconceptions. I can’t recommend this book anymore its brilliantly dark ad whimsical.